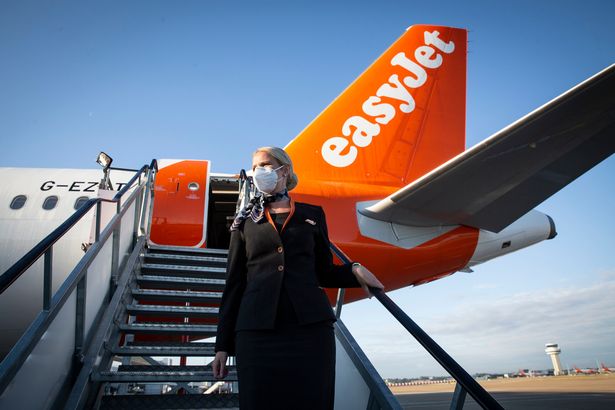 Easyjet Boss Says Travel to Spain Should be Possible From July. image: EasyJet

British Expat Pensioner Left In Tears After Being Refused Boarding By EasyJet At Malaga Airport.
A BRITISH expat was left in tears on Saturday, March 20, when easyJet staff refused to let her board her flight to Luton. Janet Gillett, 78, a grandmother who lives in Calahonda, Mijas Costa, had left her home that day looking forward to seeing her family and especially her grandchildren.
Janet had taken a Covid test in a medical centre in Calahonda, which was clear, in enough time to satisfy government requirements – that is within 72 hours before arriving in the UK.
She had already downloaded and filled in the required form from a Covid service provider in the UK that would enable her to take the two Covid tests on days two and eight – another government requirement. A friend even agreed to pick and drop off the tests for her while she was isolating in the UK.
Everything was going to plan, at least that was what she thought until she arrived at Malaga airport and discovered her flight was delayed – after roughly an hour extra of waiting she was finally called to board the flight. As she approached the desk she noticed some people sitting down filling forms in. Not thinking anything of it she turned her iPad towards the check-in assistant to show them her Covid test form for the UK, this is where the trouble started.
Janet was told the form was incorrectly filled in and the reason given was that there was a lower-case ‘e’ before the seven numerals – ‘this was not acceptable’ explained the easyJet check-in assistant. After the shouting, the arguing and the crying, Janet was led downstairs where other refused passengers were collecting their baggage as the captain of the easyJet flight refused to wait any longer and decided to take off without them!
Janet had tried in vain to redo the form, but with all the stress just couldn’t connect to the internet at the airport and to make it worse the other easyJet operative downstairs at baggage collection said her form was correct and didn’t understand why it wasn’t accepted.
To make things worse it meant Janet had lost the train fare she had paid for and would now need to book another next available flight which was tonight, Tuesday, March 23. Of course, she now had to book yet another Covid test in Calahonda and taxi fares back and forth – all a very expensive and highly stressful experience.
Here is the email Janet sent to me explaining the final phase of her horrific story.
‘Sorry I didn’t get back to you yesterday but I spent all afternoon trying to find information from government websites and providers of Covid tests, then I did at least two Locator forms so that I could perhaps have one correct that would be accepted by easyJet. In the early hours of this morning, a notice popped up ‘latest update from government’ confirming necessary letters or numerals. I contacted the third Covid test provider (info not available easily on recommended providers) to ask if they could reassure me that the code for my purchase of the Covid test in the UK was correct. It had two hyphens which I didn’t think had been mentioned! I got the normal machine reply not exactly answering the question. Today I can’t find the information on codes anywhere.
‘However, I did read an article that there was a seven-hour hold up at a UK airport because of paperwork. Should I actually be able to fly this evening I may not make my train and will therefore have to book a hotel.
‘All the rules are changing again on Monday! Fines of £5,000 for going on holiday. Talk of banning all other countries from entering the UK. No holidays abroad July and August. Did I mention last night that the site for recommended quarantine holidays has disappeared? Total chaos.’
‘Too weary to fight it any more.’
Regards
Janet
Update: easyJet sent Janet an email saying they are sorry to see she was a ‘no-show’ on Saturday…
Let’s hope all goes well for Janet, she wrote to EWN in the hope no-one else would have to suffer this horrific experience. We will keep in touch with her and inform our readers of her hopefully safe arrival in the UK.