Barrister Speaks Out After Her Dog Mauled Beloved Seal 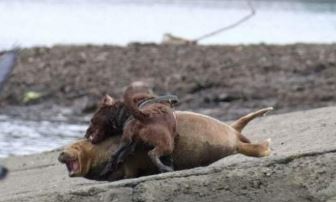 THE barrister whose dog mauled beloved seal, Freddie Mercury, to death has spoken out about the tragic incident.

Rebecca Sabben-Clare QC, whose dog mauled a seal the public had nicknamed Freddie Mercury, has spoken out today saying she was left “heartbroken” after the badly injured animal sadly had to be put down because of its injuries.

Sabben-Clare, who is a leading commercial barrister, said she wanted to “apologise unreservedly” for the “terrible accident” and wished her dog had been on a lead.

The 10-month-old seal pup had been lying on the slipway near Hammersmith Bridge when the crossbreed dog attacked it.

Sabben-Clare and other members of the public in the area, including a vet, tried to prise the dog off the seal. The wild animal was later taken to South East Sussex Wildlife Hospital in Tilbury and was treated for a dislocated flipper and joint, a broken bone, and ligament and nerve damage.

The seal, who had been nicknamed Freddie Mercury and become a local celebrity, could sadly not be saved and was later put down.

Ms Sabben-Clare, 49, said: “I am heartbroken by this terrible accident.”

“As an animal lover, I fully understand the dismay that has been expressed. I apologise unreservedly for what happened. In hindsight, I wish, of course, that the dog had been on a lead but at the time that did not seem necessary.”

“I am hugely grateful to all those who helped at the scene. They were heroic. I left for my own safety and that of my dog, believing that there was nothing that I could do to help as the seal was being looked after by a vet and help had been called. I offered my contact details to the vet before leaving.”

Although it is not illegal to have dogs off their leads in open spaces, the incident has led to new demands for dog owners to exercise better control of their pets.

The RSPCA confirmed that no offence had been committed by Ms Sabben-Clare and she has since made a donation to the Wildlife Hospital which treated the seal. However, police are looking to speak to witnesses and are investigating the incident.