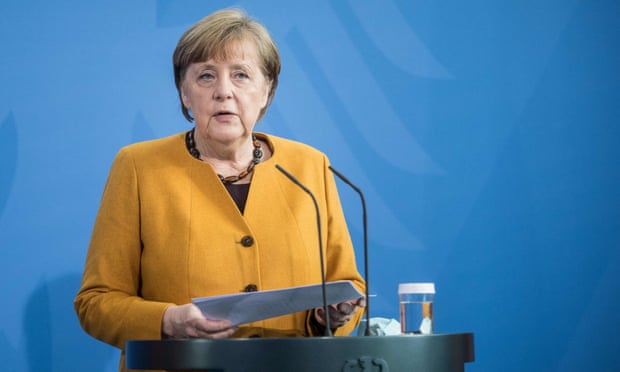 Germany is proposing tougher lockdown measures for more than 37 million including curfews and stay-at-homes rules.

After talks with regional leaders, Chancellor Angela Merkel said Germany was now in a “very serious” situation. Restrictions will be even tougher from 1-5 April, when most shops will be shut and gatherings will be limited. Germany’s public health institute, the Robert Koch Institute (RKI), reported 15,813 new COVID-19 cases on Wednesday, and 248 deaths.

However, German Chancellor Angela Merkel and the leaders of Germany’s 16 states have agreed to reverse their plan to toughen virus lockdown measures over Easter.

Merkel announced the changes after an impromptu videoconference with the 16 regional leaders in which she explained the U-turn and said the mistake was ultimately hers to answer for. During a press conference, Merkel said the Easter lockdown was formed “with the best of intentions.”

“We must try to slow down the third wave of the pandemic. Nevertheless, it was a mistake,” Merkel said, adding: “Because at the end of the day, I carry the last responsibility. It’s now important for me to say so here. A mistake should be called a mistake and above all, it should be corrected, preferably in good time,” she stressed, asking citizens for forgiveness.

Merkel said that on closer analysis, the planned shutdown risked doing more harm than good. She also said there was not enough time to adequately offset some of the problems that would come with it, such as lost earnings and working hours.

“It was well reasoned, but was not really doable in such a short time,” Merkel said of the Easter measures. “Many too many questions, from missing wages through to the loss of time in factories and facilities, could not be adequately answered in time.”

The Chancellor than appealed for understanding that there would be “no time for questions” as she must attend a questioning session in the Bundestag.

Angela Merkel is set to extend coronavirus restrictions in Germany into April despite mass anti-lockdown protests. Several states have expressed their intentions to extend COVID-19 restrictions into April as Germany battles a third wave of the coronavirus, according to a draft plan obtained by news agencies.

The proposal comes as the coronavirus incidence rate crossed the critical 100 in 100,000 mark- the government had previously said this level be enough to trigger new curbs.