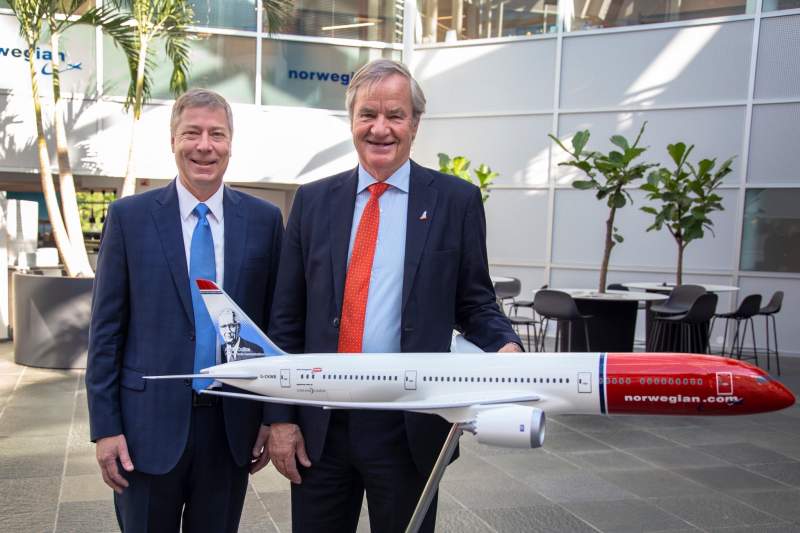 Bjørn Kjos, with the red tie, before leaving the airline Credit: Twitter

ONE of the founders of the now partially bankrupt Norwegian Air, Bjørn Kjos is looking to return to the cheap intercontinental airline market.

The 74-year-old retired as CEO of Norwegian two years ago but could now benefit from its demise as he is talking about leasing 12 of the Norwegian Air Boeing 787 Dreamliners which were purchased during his tenure.

He wants to create Norse Atlantic Airways with an initial investment of 1.5 billion Norwegian Krone (€147.6 million) working with former colleagues including Espen Høiby, a former SAS pilot and brother of Crown Princess Mette-Marit.

He told NRK “We’ll start with 12 of Norwegian’s former Dreamliners. The difference between us and Norwegian is that we don’t have any debt, and we can get the aircraft for half-price.”

In the meantime, creditors of Norwegian including more than 30,000 passengers as well as former staff are left unpaid due to the bankruptcy protection granted to the airline in Ireland and Norway.

Some critics argue that it was the speed in which Kjos grew the airline and the massive purchase of aircraft which it couldn’t really afford that spelled doom for Norwegian which was suffering financially even before the advent of the Covid-19 pandemic.

Time will tell whether there is going to be a viable market for transatlantic travel in the near future although Norse Atlantic Airways hope to float on the Norwegian stock market within a month or so and start flights in December.

Thank you for taking the time to read this news article “Former boss of failed Norwegian Air to front new low-cost airline”.