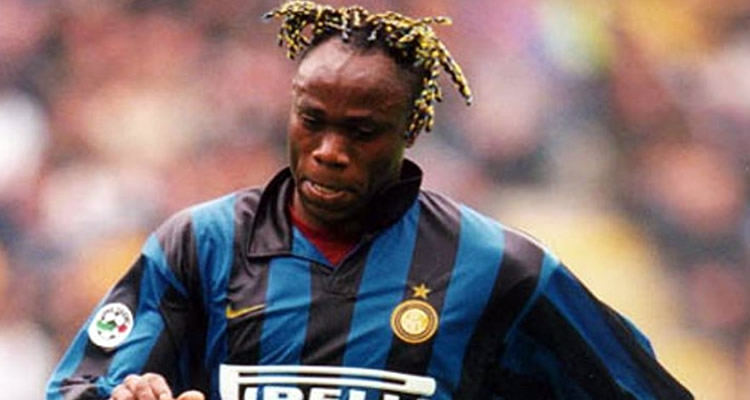 Nigeria’s Taribo West, now 46 years old, is one of the most successful Nigerian footballers of all time, having enjoyed spells with some of Europe’s top clubs during his career, starting out in the Nigerian Premier League, from where he joined French Ligue 1 outfit Auxerre, winning the league there in 1996, before winning a lucrative move to Serie A giants, Inter Milan in Italy.

It was there at the legendary San Siro stadium that the 6ft 1in defender West played alongside some of the superstars of the day, Brazil’s Ronaldo, Argentina’s Diego Simeone, and Italian legend Javier Zanetti, and won the UEFA Cup, but he fell out of favour with manager Marcello Lippi and ended up making an extremely controversial cross-city move to rivals AC Milan.

This move, according to West, in an interview with Score Nigeria, is what caused him a problem with the mafia, telling them, “The Mafia would do anything in their powers to make sure I was done away with at Milan. They cooked a vicious story in the press that I was injured in the desperate bid to send me out of Milan”.

He continued, “The doctors were bribed to say I was injured, but it was a lie. They did that because they felt it was unthinkable for an African player to take the place of those three ageing defenders, Franco Baresi, Alessandro Costacurta and Paolo Maldini. Liverpool came with an offer, but at the end of the day I had to settle for Derby County”.

In 2000 he signed for Derby County, playing just 18 times for them, before moving to German Bundesliga club Kaiserslautern on a permanent deal, later playing as well for Partizan, Al-Arabi, Plymouth Argyle and Paykan before retiring in 2007, as reported by dailystar.co.uk.

Thank you for taking the time to read this news article “Nigeria’s Taribo West Claims Mafia Forced Him Out Of AC Milan”.