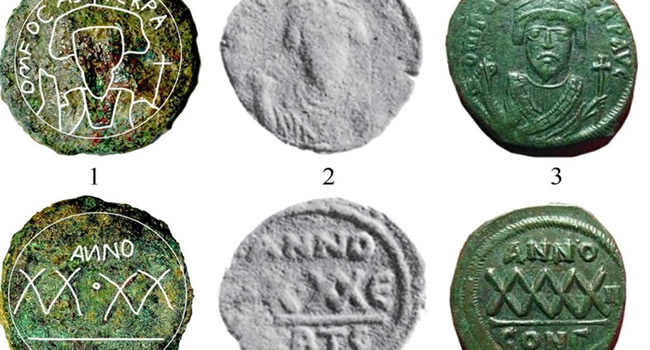 The government of Cueta announced today, Saturday 27, news of an incredible discovery made by archaeologists working on an excavation carried out last summer in the Baluarte de la Bandera, of the Royal Walls in Ceuta.

After processing and documenting the materials they had discovered during the dig, it was revealed that they had uncovered a copper coin called a ‘follis’ – the first one ever found in the city – that dates back to the Byzantine era, which, experts say, would have been minted by Emperor Focas between 602 and 610.

The coin is small, barely 3/4inch in diameter, and is usually the case in archaeological finds this old, the condition of the coin is not good, but, in spite of its condition, Dr Moreno Pulido from the University of Cádiz, a specialist in ancient numismatics, has carried out a reading of the markings on the coin.

The front face of the coin, it depicts a frontal view of the emperor, with a crown, adorned with earrings and a toga, holding a map in his right hand, and in the left a cross, while around the edges of the coin it reads, ‘Dominus Noster Focas Perpetuus Augustus’ – Our Lord Focas Perpetual Augustus, and the rear face has the letters XX · XX that refer to the coin’s value of 40 nummi.

Only 50 coins from the era of this emperor have ever been unearthed in the West, in Mauretania Tingitana – which is modern-day Morocco, Spain, Gallia – which is present-day western Europe, and Britain, including both gold and copper coins, and never in good condition, but the fact that all of the coins were discovered in maritime regions serves to highlight the Byzantine’s involvement in maritime and fluvial commercial traffic.

Archaeologists have pointed out that very little is known about the life of Emperor Phocas before he became the emperor, only that he was a soldier, of possibly Thracian origin, who forged a successful military career that allowed him to be appointed an officer.

Taking advantage of the unrest of the army after the campaigns on the banks of the Danube, he marched on Constantinople where he overthrew Emperor Maurice in 602, but his reign was relatively short as he was also dethroned and executed in 610.

Thank you for taking the time to read this news article “Ceuta Coin Find Dates Back To 7th Century”.