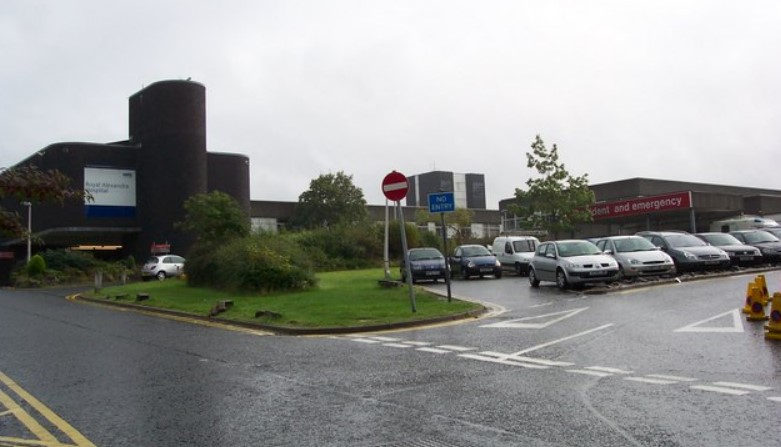 Police Scotland has confirmed that they have now identified the man found dead in the grounds of the Royal Alexandra Hospital in Craw Road, Paisley last Wednesday morning (March 24), as that of 26-year-old Stephen Quigley, from Neilston, Glasgow, but detectives say the death is still ‘unexplained’.

Quigley’s body was discovered at around 7:20am on Wednesday, and a police investigation team has since established that he could have been staying at an address on Tuesday in the area of Bourock Square in the Auchenback, Barrhead and that at around 5pm that same day, Tuesday, he possibly travelled to the hospital in a blue Ford Focus.

Officers have asked anybody who might be able to help to please come forward with dashcam footage that might show a vehicle of that description acting suspiciously, or being driven erratically at around that time of the afternoon in the area.

The police say that an assault was reported in Bourock Square at around 2am on Wednesday morning where a 26-year-old man was seriously injured.

Police Scotland’s Detective Chief Inspector Scott McCallum said, “Stephen’s family are being provided with support by specialist officers and have been updated. Our thoughts are with them at this time. We would urge anyone who believes they may have seen Stephen before him being found on Wednesday morning to please get in touch as soon as possible”.

He continued, “In particular, we are keen to speak to anyone who may have been driving near to the hospital, or in the area of Bourock Square, Barrhead, around 5pm on Tuesday, 23 March, and saw a blue Ford Focus”.

Mr Quigley is described as being white, around 5ft 10in tall, of slim build with short dark hair, and at the time of his death, he was wearing a blue hooded top that was zipped up, black tracksuit bottoms and black trainers, as reported by scotsman.com.

Thank you for taking the time to read this news article “Paisley Hospital Grounds Dead Body Identified By Police”.