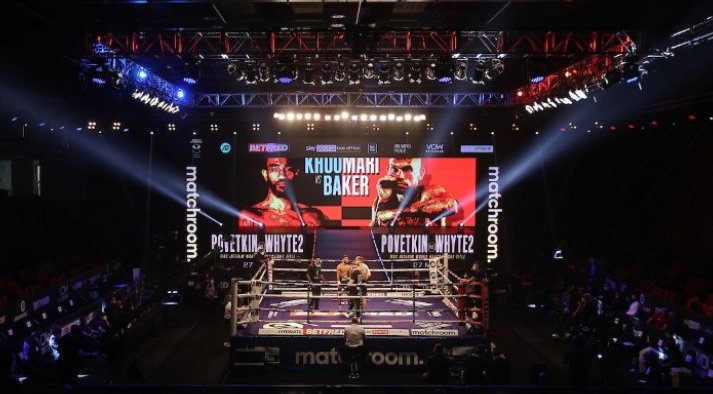 DILLIAN WHYTE KOs Alexander Povetkin In Gibraltar in their rematch

After a shock upset which saw him getting knocked out seven months ago in Essex, England, by the Russian, Alexander Povetkin, tonight, in their big rematch in Gibraltar’s Europa Point Sports Complex, in front of 500 Covid-free fight fans, 32-year-old Dillian White got his revenge, and stopped his rival in the fourth round, to relight his world title ambitions.

Whyte had gone into the first fight seven months ago as favourite, seen as a basic warm-up for a world title tilt, but it all went wrong as he was knocked out in the fifth round, in what was seen as a real upset at the time, but tonight, the ‘Brixton Body Snatcher’ controlled things from the first bell as the 41-year-old Povetkin struggled to make an impression.

A first-round punch knocked the Russian off-balance, with Whyte’s right hand was finding a home as Povetkin, who had battled Covid-19 since the first fight, struggled to gain a foothold in the fight, as again, in the third round, a big right shook the Russian.

In the fourth round, it was all over as a right hand sent Povetkin backwards, another sent him into the ropes and a left hook floored him heavily, he found his feet but was rightly stopped, as the Russian’s corner threw in the white towel, to suffer only his third-ever loss, with Anthony Joshua and Wladimir Klitschko the two other fighters to previously beat Povetkin in his 39 professional fights.

Whyte said afterwards, “He’s a tough guy, and I had to be careful, but I could have finished it early. I’m ready to run it back again if he wants. I shouldn’t have lost the first time. From the first round, I was on to him. I still believe I can be a world champion and I can beat anyone”.

Whyte will likely need to wait for a world title shot if Joshua and Tyson Fury – who hold all four major belts between them – finalise the details for two successive bouts.

Thank you for taking the time to read this news article “Dillian Whyte KOs Alexander Povetkin In Gibraltar”.