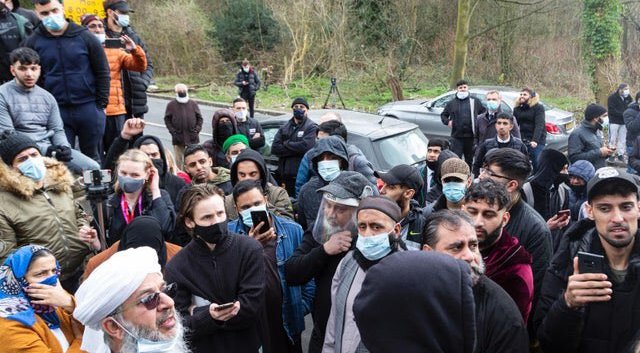 A 62-year-old Imam who protested and voiced his “disgust” when a Batley Grammar School teacher showed his students cartoons of the Prophet Mohammed has spread anti-vaccination and anti-gay propaganda online. Muslim preacher Mohammed Amin Pandor belongs to the conservative Deobandi branch of Islam and has written openly on social media of “the uncertainty of the ingredients” in coronavirus vaccines.

He stated on Twitter and Facebook that Covid jabs should be avoided and instead should recite his prayer three times for a “definite remedy for safety from every form of harm and disease”. The Imam has previously condemned gay marriage and even popular reality TV show Strictly Come Dancing, saying that it “not acceptable.”

An RE teacher was suspended earlier this week after sharing controversial French Charlie Hebdo cartoons to students during a class on religious blasphemy, sparking several days of protests outside the West Yorkshire school.

Speaking to those gathered at the school. Mr Pandor, a former staff member at the Department of Health, said:

“What happened here, we are disgusted. What has happened is totally unacceptable and we have made sure they are aware. The teacher has been suspended. They can’t just sack him, they need to do their due process. We’ve asked for an investigation, an investigation to be independent. We are going to work with the school to make sure things like this don’t happen.”

Meanwhile, more than 40,000 people have now signed a petition supporting the teacher, who defended his decision by claiming that he “was trying to educate students about racism and blasphemy”.