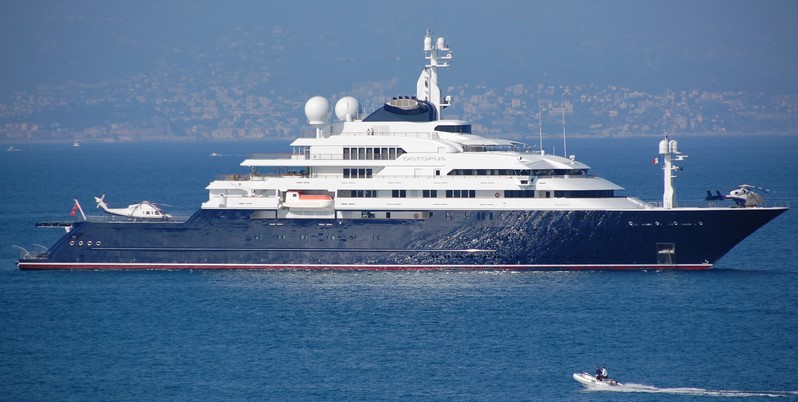 The incredible superyacht ‘Octopus’ which has been moored on and off in the eastern jetty of Málaga port since Saturday, September 21, 2019, set sail again on Thursday afternoon (March 25) heading for the Italian port of Cagliari, but there are reports that it might return to Málaga at the end of the year.
Before the 2019 arrival, the boat had already paid four visits to Málaga, and after making two dock changes due to internal traffic needs and making two short departures to the bay, on January 15, 2020, after four months of stay, it left the waters of Málaga to sail to Italy.
The port authorities in Málaga had offered this superyacht all the comforts to wait for a new owner, and on Wednesday, June 3, 2020, the Octopus, returned to Malaga from Gibraltar, to reoccupy the eastern jetty, the same location that it had used just a few months ago.
The beautiful boat was originally built for Paul Allen, the Microsoft co-founder, between 2002 and 2003 in the German Lürssen shipyards, and is now in the hands of his heirs, but in February 2019, the private pleasure vessel was put on the market for sale at the price of €295m.
The ‘Octopus’ is no longer in the list of the world’s top ten most luxurious private pleasure vessels, but its value is in the heritage attached to the ownership of the boat, plus the fact that it possesses a series of features that, even today, differentiate it from other large boats of the private sector, as reported by malagahoy.es.
_______________________________________________________
Thank you for taking the time to read this news article “The €295m Superyacht ‘Octopus’ Departs Málaga Port Bound For Italy”.
For more UK daily news, Spanish daily news and, Global news stories, visit the Euro Weekly News home page.