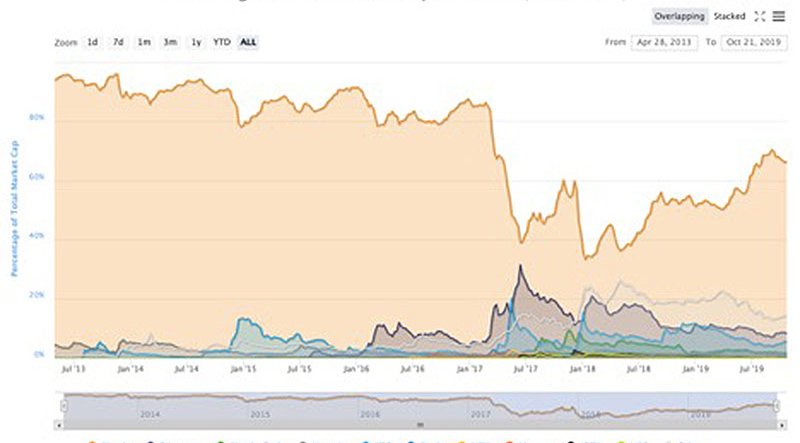 Bitcoin has shown staggering performance in the last couple of months. No matter, how much it has been criticized for its uncontrollable nature and legitimacy issues, bitcoin successfully gained enough popularity to impact the global economy.

People who were afraid to take a chance with bitcoin trading are now considering it as an opportunity to make lift up their financial status. If you have not traded bitcoin yet, there are some platforms like https://bitcoinformula.net/ that could be helpful to learn the basic fundamentals of crypto trading the market capitalization of bitcoin is far more than other cryptocurrencies, which makes it a crypto market dominator.

There was a time when bitcoin had a hold complete dominance over the crypto market, but as other cryptocurrencies emerged, things changed slightly especially after the success of Ethereum. As altcoin started to enter the market, the bitcoin level of dominance gradually decreased, but bitcoin’s image does not get that much affected when falling in the price of bitcoin was followed by the other cryptocurrencies at the same time.

Will bitcoin remains a cash cow in future

The involvement of SMEs and large enterprises in bitcoin has been increased over time, besides the fact that many nations discourage bitcoin due to its volatility and decentralized nature. The reason behind this is that bitcoin provides a more convenient way of transaction with less transaction fee charged. Businesses are not fully satisfied with the banking system and consider bitcoin free from “Middleman”.

The interest that has been shown by global companies like Tesla and PayPal further give confidence to other business to invest in bitcoin and use it as a payment method. Tesla’s image has been portrayed as a chance taker and trendsetter in embracing bitcoin.

Another important aspect that has not been highlighted yet properly is the capability to dodge the watchdogs. The income generated from the bitcoin trade is surely taxed but the question is how transparent it is? The purchase of bitcoin does not have to be shown in the income tax and profit generated from crypto could be manipulated to avoid taxes.

The relaxation in monetary policy by the central banks all over the world has led to the printing of billions of dollars. This has made individuals and financial institutions find an appropriate way to preserve the purchasing power, and the best option that has opted is the bitcoin.

Why bitcoin is gaining popularity whilst its trust issues

Bitcoin has been criticized by several authoritative bodies for its trust issues, as bitcoin is not supported by any government or legitimate authority. Many crypto lovers claim the bitcoin is superior to other stated own paper currencies.

Well, the fact is that cryptocurrency does have a headquarter, not officially declared headquarter but the basic structure backing cryptocurrency is in China. The Chinese government has control over mining to some extent.

No matter, how much cryptocurrency existence is condemned, the world is moving towards a “free currency”. As far as Issues regarding its legitimacy, there are solutions to it like “stable coins”. Something that holds value to back the cryptocurrency, like US dollar value was affiliated with Gold.