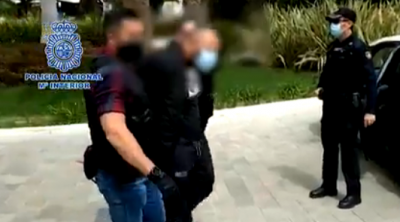 THE DJ killed by a stray at an illegal party in Marbella had reportedly played at another event where a Moroccan man was shot.

According to reports, the DJ who was killed by a stray bullet at a party in Marbella had previously played an another illegal event where another man was shot.
Jose Maria AF, the 41-year-old Galician DJ, who died in a villa in Marbella early Monday morning from the impact of a stray bullet during an illegal party, was playing at another event last year which saw a Moroccan man shot twice in the body and almost die.
The incident reportedly took place on December 5, last year at a party held in a villa in the Los Flamingos urbanisation in Benahavis that Jose Maria was hired to play at.
Several of the guests reportedly became involved in an argument with a 37-year-old Moroccan man before someone fired two shots into his lower back.
The victim was taken to hospital for his injuries and was interviewed by police.
Jose Maria was later killed at another illegal party in Marbella on Monday.
Officers from the National Police have arrested one man for allegedly firing the shot that killed the DJ in Marbella and another as an accessory.
According to police, both men were intending to leave the country before their arrest.
The Provincial Police Station confirmed it had arrested a 30-year-old German man on suspicion of killing the DJ, as well as of omission of the duty of assistance and illegal possession of weapons.
The arrest took place in Malaga, while officers also arrested another 28-year-old German man on suspicion of hiding the crime.
The news comes after officers investigating the Marbella shooting which left the DJ dead say they believe the stray bullet which killed him travelled through a wall.
Specialists from the National Police Corps studied the trajectories of the bullets and reportedly found the shots had been fired in a room adjacent to the area of ​​the house where the victim was, who had his back to a wall, with a table in front of him where he had the equipment to tap music and the rest of the audience in front of him.
The say the shot came out from the firearm, bounced off the ceiling of the room, went through a wall and hit the victim’s neck.
The 40-year-old man who was working as a DJ at an illegal party in Marbella, died on Sunday night, March 28, after he was hit in the neck by a stray bullet.
He was believed to have been playing music at a party which was being held at a luxury villa on the Guadalmina Baja Urbanisation when he was hit by the bullet.
He was found by the National Police in the villa, but the partygoers were nowhere to be seen.
According to national Spanish press, there were three shots heard, one of which hit the DJ.