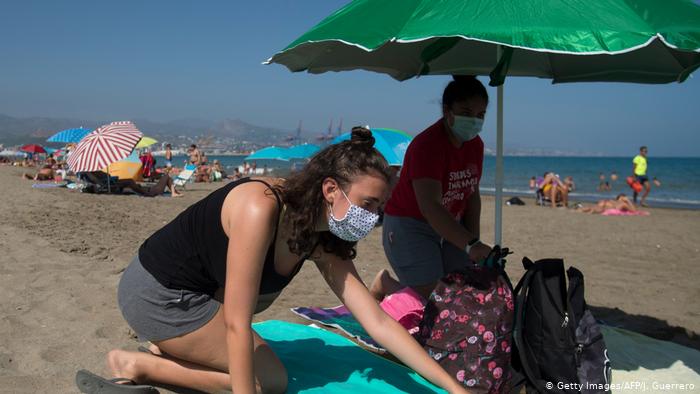 Valencia Seeks To Scrap Mask-Wearing On The Beach image: Wikimedia

SPAIN’S tourism sector is leading attacks against the mandatory mask law saying “They (the government) are going to turn the beaches into field hospitals.”

The tourism sector group Exceltur believes that the measure is “improvised” and does not contribute to giving more security to those who visit Spain and could completely ruin plans for a summer 2021 uptake in tourism.

After more than a year of suffering a severe pandemic, the tourism sector desperately needs good news. However, the government’s decision to force the use of masks in all open spaces has delivered an unexpected blow. Until now, the state regulation only imposed masks outdoors if a distance of one and a half metres could not be guaranteed.

The obligation to cover mouths and noses on the beach will help dissuade those who are thinking of travelling to Spain. The group said the sector contributed 12 per cent of the national wealth before the coronavirus pandemic.

“We are going through an agony that threatens to end thousands and thousands of jobs and businesses. And now they want to turn the beaches into open-air field hospitals,” criticises José Luis Zoreda, vice president of Exceltur, the body that lobbies for Spanish tourism.

Adding to the outrage is the fact that businessmen in the sector were not even aware of its existence until its publication on Tuesday, March 30, in the Official State Gazette.

“Holy Week we already give it up for lost. The crucial thing now is to bet on the summer. And for this we must achieve high levels of trust for foreigners or Spaniards who want to visit us,” continues Zoreda, who does not believe that this type of measure, which he considers “improvised,” will move in that direction.

“We ask that tourism be a State policy. And more consistency in the measures it takes, many of them are contradictory,” protested Zoreda.

Protests continue to come in from all over Spain.

The president of the Malaga Beach Business Association, Manuel Villafaina, believes that the restrictions make customers feel uncomfortable; especially in outdoor places where safe distances can be kept. “When you go for a walk it is logical that you wear the mask, but if you are in a hammock two metres from another it is not logical. There are some people who feel uncomfortable and prefer to stay at home,” explains Villafaina, who represents 1,100 businessmen of beach bars, hammocks and nautical businesses in the area.

The Benidorm hotel association, Hosbec, considers this initiative “exaggerated.” “The security measures that were taken last year for beach subdivisions, maintaining distances and monitoring compliance with regulations proved to be effective,” says Nuria Montes, general secretary of the association. “In 4×4 metre plots, if you are with partners and keep your distances, we do not understand why a mask will be necessary when sunbathing,” he adds.

In Andalucia, Juan Zapata, president of the Federation of Hotels and Tourist Accommodation (Fahat), considers the mandatory nature of the mask to be “bearable.” “In Andalucia we already had to go to the beach with a mask last year, a measure well accepted by tourists taking into account the seriousness of the situation,” he says.

“What really worries us hoteliers are the progress of vaccines and mobility restrictions because without mobility there is no tourism,” he adds. Eighty per cent of the 500,000 hotel rooms in the community are currently closed and the remaining 20 per cent ​​are only occupied a little more than a 10th, according to their organisation.

The effect of the new law on tourism.

Britons make up the largest group of foreign tourists to Spain – some 18 million travelled there in 2019. This week alone, some 600,000 Brits would in normal circumstances fly to Spain, according to estimates from public relations group PC Agency, cited by the Financial Times. Germans, meanwhile, are the second largest group – some 11.2 million travelled to the Iberian country in 2019.

Tourism is also responsible for 11 per cent of jobs in a country with a stubbornly high jobless rate, at more than 15 per cent. Tens of thousands of seasonal workers move from northern and rural parts of the country to the eastern and southern holiday resorts – as well as the Balearic and Canary islands – during the summer months to pick up work in hotels, bars and restaurants.