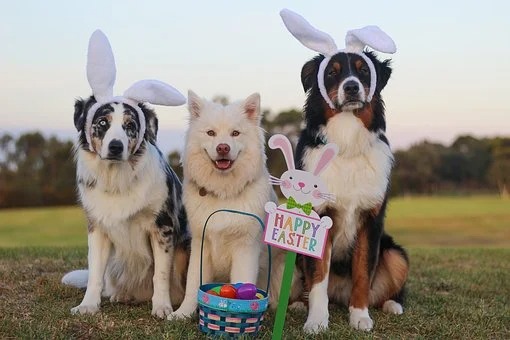 EASTER warning for dog owners to keep pets clear of their Easter eggs. Many Expats will be eager to get their hands on traditional Easter eggs, but vets have issued a warning about the dangers they pose to pet pooches.

Many Expats in Spain will be looking forward to traditional Easter eggs over the coming days, but a labradoodle named Bruce has made vets issue a warning reminder to keep animals away from chocolate.

Bruce is lucky to be alive after he was rushed to his vets after he scoffed down a staggering 12 Cadbury’s Creme Eggs along with a large quantity of dark chocolate. Alison Rothery, from Fordingbridge, explained how Bruce had managed to get at the chocolate despite her attempts to hide it.

Alison explained that, ‘We had the Easter chocolate high up in the larder, right at the back and actually on a shelf above, where we thought he couldn’t possibly have reached.

‘But I came down to find Bruce’s bed full of Creme Egg wrappers and chocolate bar wrappers. We must have left the door ajar and he’d obviously sniffed his way in, stood up and helped himself.’

If Bruce’s owner and had not been aware that chocolate can be dangerous, he could have easily lost his life as he had appeared fine when she found him. But he had already consumed a toxic amount of chocolate.

Alison said that, ‘He actually didn’t seem out of sorts, just a bit over-excited, probably because of all the sugar. But when I realised just how much chocolate he’d eaten I knew I needed to get help.

‘The Creme Eggs were obviously a concern, but I was more worried about the dark chocolate, as I knew that could be worse.

‘And although this was first thing, I couldn’t be sure if he’d just eaten them or he’d had them earlier in the night and he’d had them in his system for hours.’

The chemical in chocolate that is toxic to dogs is named theobromine, and appears in larger amounts in dark chocolate, although it is present in other chocolate in varying amounts too.

Senior vet surgeon Dave Hollinshead said, ‘While Creme Eggs are not particularly high in theobromine, dark chocolate is and it was clear Bruce had ingested a toxic amount.

‘After discussing the situation with his owners, our team in Salisbury gave Bruce an injection and he brought up a lot of chocolate and quite a few wrappers.

‘Thankfully, after further checks, we were able to allow him home with a prescription of activated charcoal which helps to absorb any toxins left in the system.