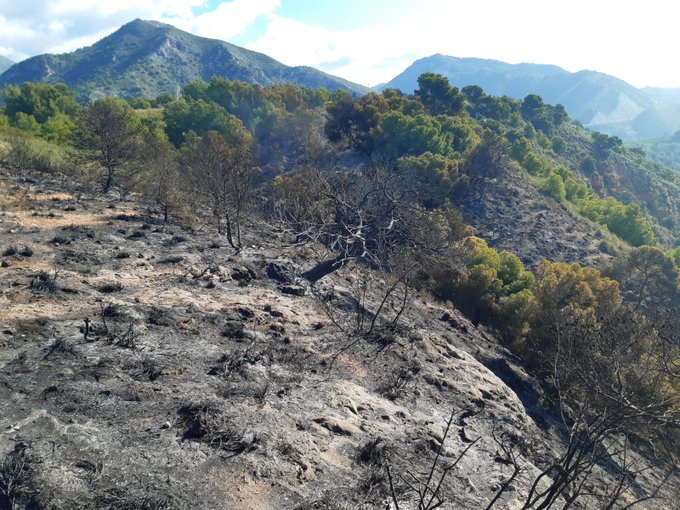 Firefighters tackle second forest blaze in a week with the latest reported in Sayalonga this morning, Saturday, April 3.
INFOCA despatched two teams of forest firefighters, two environmental officers and a heavy fire fighting vehicle to the scene today.
The cause of the fire has not yet been confirmed.

This is the second fire this week in the province of Malaga, Axarquía region.
The first occurred on Thursday, April 1, in Maro, which was finally extinguished late on the following evening and in which four hectares of land was destroyed, according to the Andalusian Forest Fire Extinction Service.

On Friday, March 2, five people were rescued by sea after becoming trapped by a fire in Nerja.
According to reports, troops rescued five people, including a 12-year-old girl, who were trapped in the Carrizal cove in Maro after road access was cut off by flames.
The fire, which broke out in a rural area of Maro, Nerja, is said to have started in a house there.
A Guardia Civil patrol boat from Motril and a jet ski from the Nerja Civil Protection service managed to take the five rescued people out to sea and take them to land.
Members of the Local Police, Guardia Civil, Provincial Firefighters Consortium and the Infoca Plan of the Junta de Andalucia also attended the scene.
More than 60 specialists, including two environment agents and two fire engines, battled the flames.
The news comes after councillors in Nerja demanded the Junta pays €479,000 for a fire station.
The proposal, presented by the Mayor’s Office, the Department of Security and Transportation, the Department of Economy and Finance and the Spokesperson for the Partido Popular (PP) was approved, with politicians saying the money owed for building Nerja’s station should be paid.
The council said the Junta had refused to help pay for the fire station.