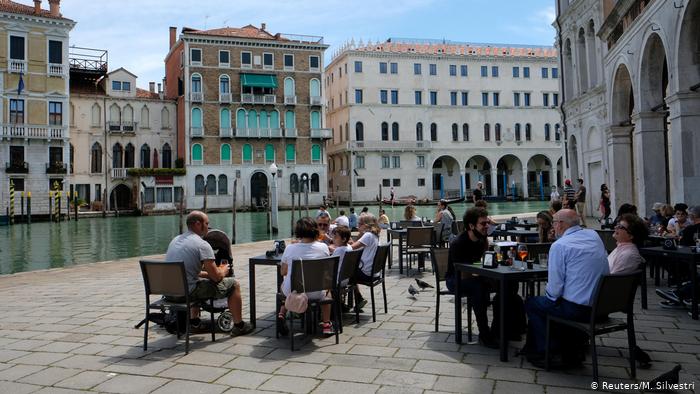 Italy has joined France in declaring a strict lockdown over the Easter period as countries across Europe struggle to cope the huge surge of infections. All of Italy has been put into the ‘red zone’ over the Easter bank holiday weekend, the highest rating in the country, meaning that all non-essential travel is prohibited but people can still meet socially in private homes with up to two other adults. After the weekend, certain regions will remain in the ‘red zone’ while those with slightly between numbers will be downgraded to ‘orange’.

As the third wave of the coronavirus pandemic batters the country, Italy is registering some 20,000 new infections each day, while 39 per cent of beds in the Intensive Care Units (ICUs) are taken up by Covid patients.

Both France and Italy are attributing the British variant of the coronavirus to the dramatic increase in positive cases, and French President Emmanuel Macron has responded by plunging much of the country into a strict lockdown until the end of April. Under his new regulations, French citizens won’t be allowed to travel more than 10 kilometres from their homes without a valid reason, the consumption of alcohol is banned on the streets and preschools, primary and secondary schools will be temporarily closed.

“The virus has, El Pat all times, been able to catch us unprepared,” Robert Fumagalii, the head of anaesthesia and intensive care at the Niguarda Metropolitan Hospital in Milan, told local publication Healio.

“We did not expect variants to have such an impact, sparking a new surge of infections even more difficult to control.’”

While just over a million people – or some 5 per cent of the population – in Italy have already been vaccinated, their rollout plan has sparked a lot of controversy, as different regions decide who the priority groups should be, with many areas inoculating lawyers and judges instead of older people.

“Some regions have prioritised other categories, such as lawyers and judges whereas other regions have proposed the vaccination of the working population first,” Patrizia Laurenti, professor of hygiene and preventive medicine, told Healio.

“There has been heated discussion, but the government has firmly reasserted that priority should be given to the most vulnerable categories.”