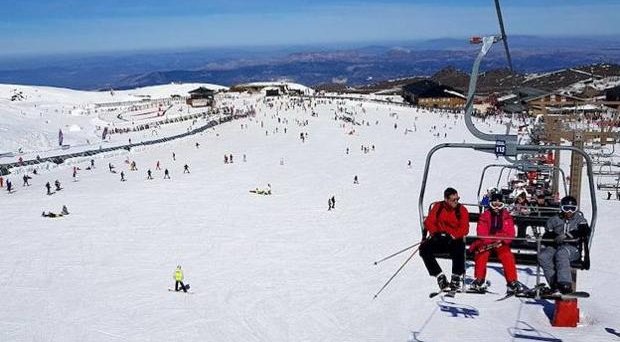 SIERRA NEVADA ski lift workers called to strike on Easter weekend over ERTE dispute
The union representing the 331 ski lift workers at the Sierra Nevada resort on the Costa del Sol has confirmed that staff will be going on strike on Saturday, April 3 in protest against the ERTE that was applied to 5 per cent of the workforce on February 1. Officials claim they are moving ahead with the industrial action following a series of “unsuccessful” talks with resort owner Cetursa, arguing that the workers approached the previous negotiations “with an open mind and willing to reach an agreement,” while “neither the Board nor Cetursa were.”
According to Cetursa, the resort has been operating at 80 per cent due to Covid restrictions and reduced demand and that reemploying 100 per cent of workers is impossible. Furthermore, the company has criticised the ski lift staff and their union reps for exercising their right to strike on Easter weekend, which they hopes would provide a much-needed boost through local customers who are confined to the region during Holy Week.
“The damage is already done,” the employers’ association claimed. “Since the news of the strike call was known, there have been day by day cancellations of reservations of clients who had thought of coming to ski at Easter.”
The Sierra Nevada Business Association has confirmed that some €500million in income has been lost since the beginning of the coronavirus pandemic, and four thousand direct and indirect jobs have been lost.
“The pandemic has taken almost everything and what little was left has been damaged by this irresponsible call for a strike,” they stated.
The Sierra Nevada was banking on an influx of customers from the Andalucían Community over Easter week to support not only the resort, but local bars, restaurants, shops and hotels.
We must provide urgent and forceful solutions for this to end. There will always be the legitimate right to strike and the worker’ labour demands, no one questions it, but this type of call and at this time, it seems more like an abuse of the right than a legitimate demand,” the Business Association concluded.