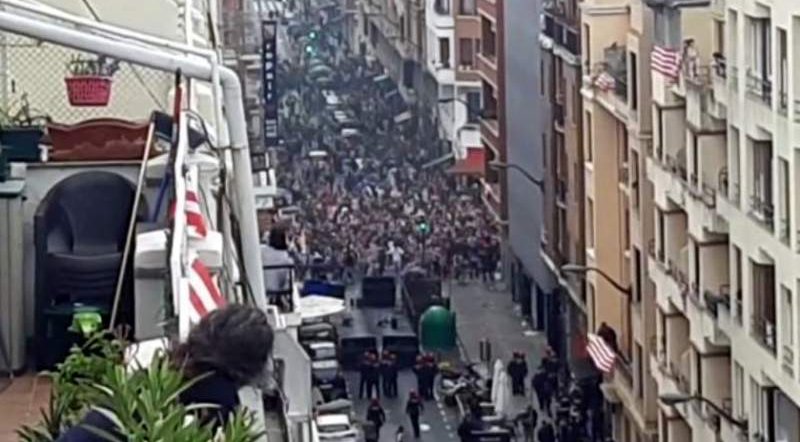 The streets of Bilbao and San Sebastián are filled this evening (Saturday 3) with 1000s of football fans gathering, clearly flouting the coronavirus restrictions, just hours ahead of the Copa del Rey final in which their two teams will compete, but minus any supporters, at the La Cartuja stadium in Sevilla.

Due to the huge rivalry between the two Basque teams, it was always going to be a logistical nightmare for the authorities to control the groups of fans from going out into the streets, and despite requests from both the respective authorities and players of both teams, asking fans to act responsibly this evening, many have congregated on the streets, with many, as reported by antena3.com, not wearing facemasks.

Iker Muniain, the club captain of Athletic had spoken to the fans from a press conference, to express his concerns for the pandemic, and of the safety of the fans, saying to them, “I want to send a message of responsibility to the people before this illusion that has been generated”.

Thousands of fans are reported to be continuing to party in the Indautxu area of Bilbao, with the intersection of Pozas and Areilza streets packed full with thousands of young people partying, while the Ertzaintza tried to intervene to break up the thousands of fans who had gathered there without observing security measures.

Some fans even set a rubbish container on fire, and one girl allegedly had to be taken to Basurto hospital due to an injury caused by a flying bottle.

In the city of San Sebastian, the desire to play in a Copa del Rey Cup Final again after 30 years has caused many Real Sociedad fans to gather in the streets of San Sebastian to cheer on their team before the game, especially in the old part of the city.