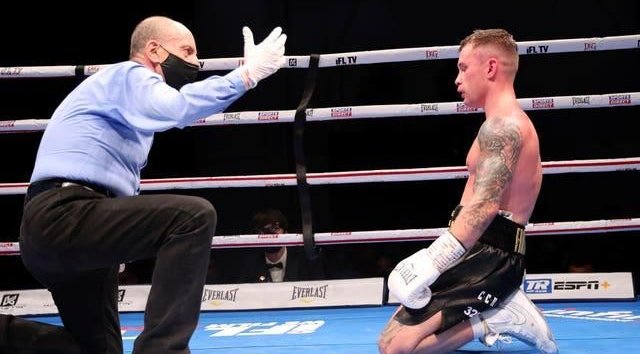 CARL FRAMPTON’S iconic career was ended without a third-weight world title by ruthless US Marine Jamel Herring, leaving him to retire in tears.

Belfast’s former super-bantam and featherweight king went up one weight too high, bidding for Herring’s WBO super-feather crown in Dubai, to become Ireland’s greatest ever fighter. And the American champion defended his title by dropping the challenger in the fifth and sixth before Frampton’s corner rightly threw in the towel.

The fans’ favourite vowed he could not afford to rebuild at the age of 34, with two children at home, so his legion of fans had to wave him off from a painful distance.

“I am deeply upset,” Frampton said. “I said I would retire if I lost and I am. I dedicate my life and career to my kids. I have missed them growing up so I am giving the rest of my life to my kids and wife now.”

And so Herring was, Frampton struggled to find his rhythm in the opening rounds as the 35-year-old American, a rangy southpaw, set a good pace and picked him off.

With trainer Jamie Moore spurring him on, Frampton found some joy in the fourth round, pushing Herring to the ropes and causing a cut on the American’s eyelid that gave the Jackal much-needed encouragement. However, Frampton’s pressure tactics played into the sharp hands of Herring, who caught him coming in with a left cross in the fifth to floor him.

It was all but over in the sixth after Herring landed a huge left uppercut to drop Frampton again. The fight was allowed to go on after the eight count but his corner finally threw in the towel with the veteran under fire.

Herring said: “I’m honoured to share the ring with him. He’s done greatness for the sport. God bless him in whatever he does from now on.”