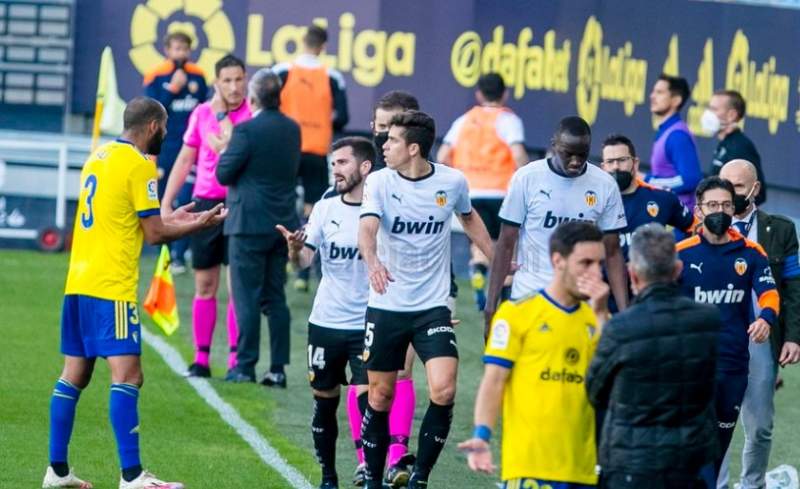 VALENCIA CF Players Walk Off The Pitch After Alleged Racist Abuse Of One Of Their Players.

In an unprecedented incident in Spanish football, during today’s (Sunday April 4) La Liga match between Cádiz CF and Valencia CF, at the Estadio Ramón de Carranza, in Cádiz, the whole Valencia team walked off the pitch in the 36th minute, and went back to the changing rooms.

This came after a flashpoint on 30 minutes between Valencia’s French defender, Mouctar Diakhaby, and Cádiz’s Juan Cala, where, following a clash between the two players, it is alleged by Diakhaby that Cala called him a “black s**t”, with the Frenchman clearly agitated, approaching Cala and then complaining to the referee, David Medie. After a brief period, the Valencia CF players returned to the pitch, minus the French defender, who apparently had requested to be substituted – with Hugo Guillamón taking his place – insisting that his teammates continued the match, and at half-time the score was 1-1.

A tweet appeared on Valencia’s Twitter page that read, “No to racism. The team have held a meeting and decided to continue the game, in order to fight for the honour of the club, but denounce racism of any kind”.

Questions were raised immediately on social media after the game resumed, commenting that the player who had allegedly made the racial abuse was still on the pitch, while others asked were the Valencia players correct in continuing the match without their player, as to whether it showed support for him in doing so, but clearly, this incident will lead to more debates on racism in sport.

After the match, which finished in a 2-1 defeat for Valencia, they released a statement that read, “What we have lost today is not a match, today the respect and spirit of football and sport have been lost”.