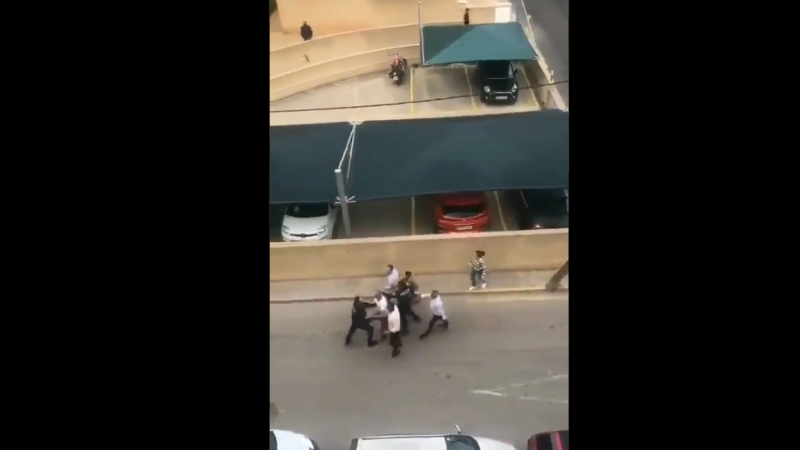 Watch The Video: The Guardia Civil are investigating a serious attack on two Capdepera Local Police officers who were involved in an altercation between a hotelier and a family in Cala Rajada.
As reported by the Civil Guard on Saturday, April 3, to local media, the incident took place in the afternoon of Good Friday, in Cala Rajada, when there was an altercation between a hotelier and a family for reasons that are as yet unknown and that are being investigated.
During the altercation, a Local Police officer of the Capdepera suffered injuries as he was knocked to the ground (see video), which is being investigated by the Civil Guard. The other officer involved suffered minor injuries as he was being pushed and shoved out of the way in what police have called a ‘very aggressive altercation’. The video below was posted shortly after on social media by @nipowifi and quickly went viral.
When the Civil Guard arrived at the scene, some of those involved in the brawl fled. Others, however, could still be identified. Currently, several complaints have been filed. The Guardia Civil has taken charge of the investigation in order to clarify the events that occurred, arrests are expected to be made soon.

It is not the first aggression suffered by officers doing their duty. A few months ago, for example, a group of people rushed and attacked several police officers in Lavapiés.
Cala Rajada is the closest point between Mallorca and Menorca, on clear days, from here you can see the Island of Menorca. Cala Rajada is a very established complex and is included among the main tourist destinations on the island.
It has evolved a lot over the years, from a small fishing village and has become a very important tourist centre. In addition to its magnificent infrastructure, its beautiful beaches of fine white sand stand out and is very popular among German tourists.