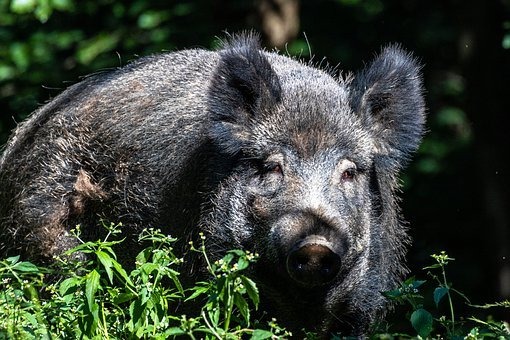 WILD BOARS are experiencing a population boom in Spain
Confinement during the coronavirus pandemic, along with night-time curfews has left many towns and cities in Spain quieter than usual, giving wild animals the perfect opportunity to become a little bolder and venture out into the open. But it’s not just built-up urban areas that wildlife is surprising people. Last month, a family in Denia in northern Alicante got the fright of their lives when they spotted a wild boar swimming a few meters from the shore. It seems like it’s something we’ll have to get used to however, as the wild boar population is booming throughout Spain, with an estimated one million already on Spanish shores.
According to professor of Zoology at the Autonomous University of Madrid and member of the board of directors of the Royal Spanish Society of Natural History, Jose Luis Viejo: “The decrease in human activity and presence allows some species of vertebrates, especially opportunistic mammals, to expand their areas. Wild boars are a typical case. They abound in rural areas and around cities due to the abandonment of agriculture and fields, therefore their habitat was already partially shared with humans”, he said.
The lack of a natural predator, such as the wolf, and its high reproductive rate – females can give birth twice a year once they reach twelve months – have caused its population to grow at an alarming rate in the last two years, so much so that authorities are worried about the damage the animals will do. Boars are capable of decimating agriculture and the native fauna, and there has been a marked increase in the number of traffic accidents caused by wild boars. The problem has become so serious that many autonomous communities allow year-round trap boxes in an attempt to control the population.
In Navarra, for example, no less than 479 traffic accidents were registered during 2018 in which wild boars were involved. Some 35,000 of the animals were recorded in the autonomous community that year.