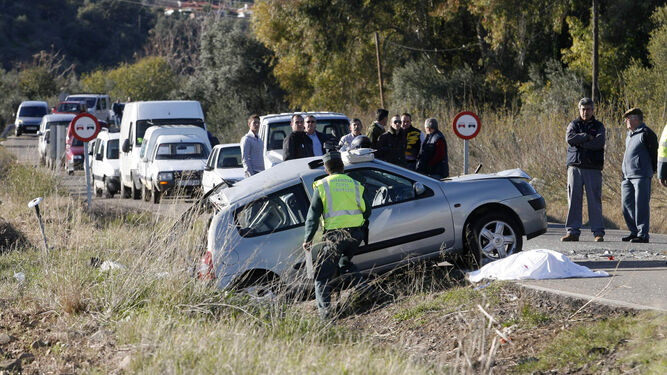 The Superior Court of Justice of Andalucía (TSJA) has confirmed a prison sentence imposed by the Sevilla Court on a man who was involved in a traffic accident and found to be ‘spaced out’ and ‘high’ on cocaine by the Guardia Civil patrol that were called to the scene of the crash.

Officers discovered 400 grams of cocaine, valued at 14,293 euros, hidden under the driver’s seat, as they examined the vehicle which had ended sideways on the motorway embankment after spinning out of control, according to witnesses. The court had heard previously that Manuel BF was driving the car around 1:00 p.m. on October 27, 2017, on the SE-40 highway when it left the road.

Officers that came to his aid observed how he tried to hide a black male bag, wrapped in cellophane, under his seat, which, upon inspection contained a white substance. After analysis at a forensic laboratory, results showed it to be cocaine with a net weight of 400 grams and with a purity of 75.61%.

The court rejected two reasons put forward by the defendant to see his sentence reduced: the consideration of his drug addiction as a highly qualified mitigating factor and the delays in the administration of Justice.

Regarding the latter, the TSJA recalls that the proceedings reached the Third Section of the Hearing in November 2018, the trial date was set for three months later, on January 21, 2019, but when it was not reached, a new Date for March 16, 2020, which means a “pretty quick” deadline.

This new trial date had to be suspended by the alarm decree due to the coronavirus, which forced to “massively suspend the signals, and the fact that the presence of officials in the courts, who were attended to, was very drastically reduced for minimum services, they are elements that cannot be overlooked ”. Finally, the trial was held on October 5, 2020.

For all these reasons, the TSJA agreed that the Sevilla Court “made the indications fairly quickly, without any delay on their part” and Manuel was ordered to serve to serve his sentence.