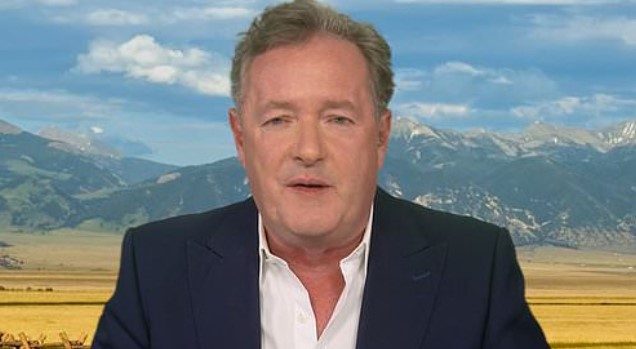 British television presenter, Piers Morgan, who famously quit the Good Morning Britain breakfast show after getting into a heated discussion with a co-presenter about Meghan Markle’s claims in her interview with Oprah Winfrey, has appeared live on Fox Nation today, Monday, speaking with Tucker Carlson.

Morgan had promised to ‘tell all’ about his quitting GMB and about the Meghan Markle claims, and right away he started, “What I was witnessing was the most extraordinarily disingenuous smear, hit job, on the Royal family, on the Queen, on the monarchy, and frankly on Britain, my country”.

He continued, “I went on air on Monday morning with full bells on and said quite clearly that I didn’t believe what Meghan Markle was saying. Here we are a month later and frankly, I’ve had plenty of time to think about this – I still don’t believe any of what they were saying”.

Adding, “Seventeen different claims by the pair of them have now been proven to be either completely untrue, or massively exaggerated, or unprovable. I don’t understand why I should have to believe people who are not telling the truth”.

Then Piers went on to the topic of Meghan’s claim that she had been suicidal yet nobody had tried to offer her any help, as he said, “You’re accusing two people in the palace of being unspeakably cruel simply to protect the brand of the Royal family, if that is true let’s have the names of these people and let’s go to them and ask them is this true”.

“Did you tell a suicidal woman, who told you she was suicidal, not to get help?” – because I find that impossible to believe”, Piers Morgan gives as a reply to Tucker.

Over the course of his hour-long chat with Morgan,  Carlson played numerous clips from Meghan and Harry’s interview, including the one where Oprah asked her, “Were you silent or were you silenced?”, to which Meghan replied was the latter.

Laughing, Carlson said to Morgan, “I’m sure it hasn’t escaped your notice that moments after she complained about being silenced, she called your boss to silence you”, with Piers simply shaking his head in dismay, before saying, “I mean, you couldn’t make this stuff up, frankly”, as reported by dailymail.co.uk.