Russian President Vladimir Putin In Power For Another 15 Years 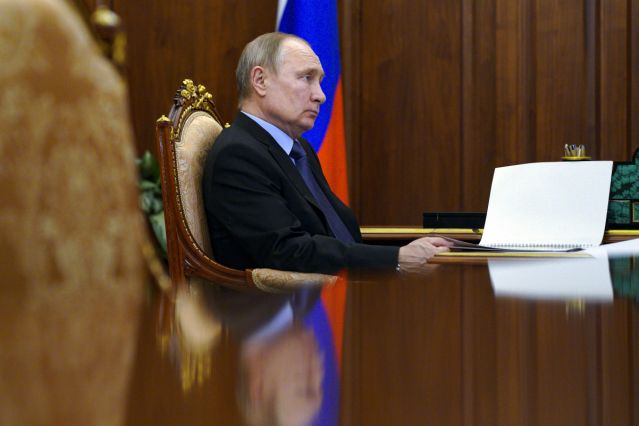 Russian President Vladimir Putin Signs Himself Into Power For Another 15 Years!

He has argued that resetting the term count was necessary to keep his lieutenants focused on their work instead of “darting their eyes in search for possible successors.”

The 68-year-old Russian leader, who has already been in power for more than twenty years, signed off on the bill, according to a copy posted on the government’s legal information portal. Putin actually first proposed the change last year as part of constitutional reforms that Russians overwhelmingly backed in a vote in July but it took lawmakers until last month to approve the bill.

The legislation will allow Putin to run in presidential elections again after his current and second consecutive term expires in 2024. Putin was first elected president in 2000 and served two consecutive four-year terms. His ally Dmitry Medvedev took his place in 2008, which critics saw as a way around Russia’s limit on two consecutive terms for presidents.

While in office, Medvedev signed off on legislation extending terms to six years starting with the next president. Putin then returned to the Kremlin in 2012, winning re-election in 2018.

Kremlin opponents have criticised the legislation allowing him to run for two more terms, calling it a pretext to allow Putin to become “president for life”.

One of the Kremlin’s main critics, Alexei Navalny has been moved to a medical facility after suffering from a  possible respiratory illness. Navalny said earlier that he had a high temperature and a bad cough, and that three of the 15 inmates in his Russian prison ward were being treated in hospital for tuberculosis.

Putin’s main critic Navalny was recently moved from the jail where he was being held – but officials have not yet revealed where he has been sent to, his lawyers revealed the news in a post on his official Twitter account.