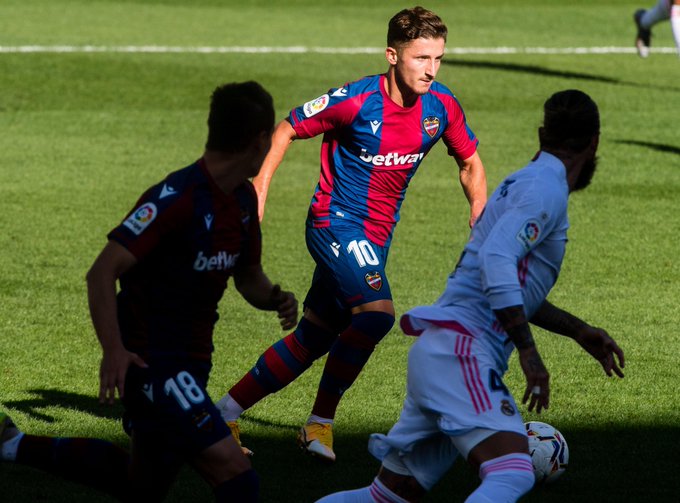 Police in Valencia investigate pro-footballer over forged driving licence.
POLICE in Valencia investigate pro-footballer Enis Bardhi over a suspected forged driving licence.
The 25-year-old Levante UD midfielder faces charges of falsifying documentation and a crime against road safety after being stopped driving his Porsche Panamera during a routine check in the city on Monday afternoon.
After requiring the documentation of the car and the driver’s licence, Local Police officers verified that the second document didn’t comply with the safety regulations, sources told Las Provincias.
The forgery was reportedly printed on card-like plastic and was of such poor quality, the officer spotted it before using the UV detector light.
The UV apparently showed it was missing security markings.
The Albanian international footballer was informed of the criminal consequences of driving with a forged licence and the fake document was confiscated.
Bardhi was “cooperative” with officers throughout and called a friend to pick him up his high-end car to avoid paying for the removal of the vehicle.
July 2017, Bardhi agreed to a three-year deal with La Liga side Levante UD for an estimated €1.5 million.
He made his La Liga debut on August 21, 2017, starting in a 1–0 home win against Villarreal CF.
On August 26, 2017, Bardhi scored his first goal in the top tier, netting his team’s first through a direct free kick in a 2–2 home draw against Deportivo de La Coruña.
The only person who scored more free kicks in the 2017–18 season was Lionel Messi.
In the 2018–19 season Bardhi cemented himself as a first team regular, making 36 appearances in the league.
Aside from this recent incident, the club said Bardhi has not been a ‘problematic player’ during his time at Levante.