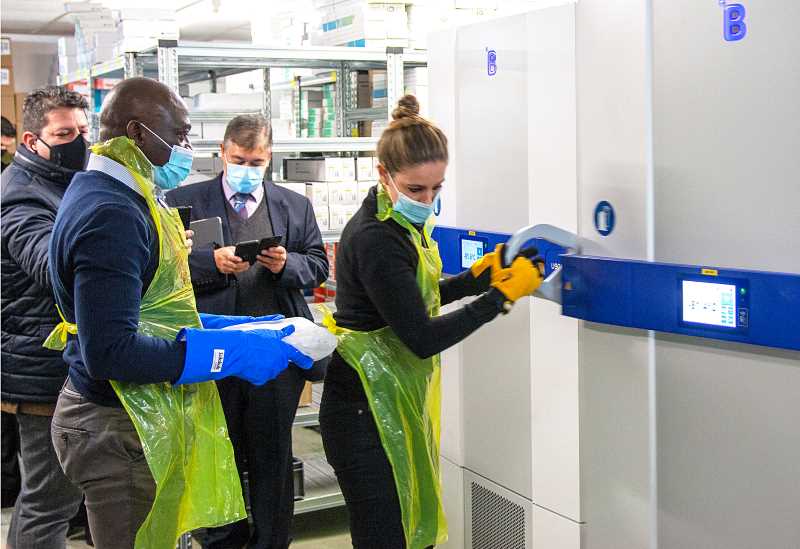 Stocks of the Pfizer vaccine are safely stored in Gibraltar Credit: Gibraltar Government

MANY UK passport holders who are resident in Spain are anxious to obtain information about when they are likely to receive their Covid-19 vaccination.

They have seen the situation in the UK speed up dramatically, whilst the Spanish health system, whilst doing its best, is much slower, due to the fact that it cannot obtain large supplies of vaccine quickly even though its population is about two-thirds of the UK.

The more people who can receive the vaccine, the quicker the country will open up and be able to return to some semblance of normality with the option to regenerate the tourism industry which accounted for 12.4 per cent of Gross Domestic Product in 2019 and earned the country €154.48 billion according to the Institute of National Statistics (INE).

One person in the Costa del Sol who has roots in Gibraltar considered the situation and saw that the UK Government was using the RAF to deliver vaccine to the Rock to allow the Health Authorities there to quickly and efficiently vaccinate the adult population who are considered British subjects.

She therefore wondered whether there would be an opportunity to suggest that Britain should consider using the Gibraltar facilities to invite British passport holders in Costa del Sol and Cadiz Province to be inoculated there.

To this end therefore, she contacted the British Embassy in Madrid by telephone and explained her idea and was asked to confirm this via email which she has done and currently awaits a response following a second email.

Clearly, it’s not an easy solution as it would require the involvement of both the British and Gibraltar governments with vaccines being flown in by the RAF and whilst the prevention of movement across provinces could delay matters, it could also be something that the British Embassy could raise with the Junta de Andalucia.

There are permitted reasons to allow individuals to cross provinces, one of which includes medical matters.

When discussing the concept with friends and other contacts, there were two negative threads, being that the Spanish population might be upset that the British were ‘jumping the queue’ although her response was that all of her Spanish friends have commented that they would be delighted as it frees up more vaccine for Spaniards.

Also, there was a suggestion that it was unfair on those who didn’t live near to Gibraltar as they would not benefit and to some extent this is true but once again, the more people who are vaccinated outside of Spain, the more vaccines will be available for those inside.

Britain has on numerous occasions said that it considers the welfare of all British passport holders, resident across Europe, as being of major importance, not just because of Brexit but because it has an obligation to protect their well-being.

This may be a small way in which it can assist just a few people but this is an opportunity for both the UK and Gibraltar to show its solidarity with British expatriates in the south of Spain.