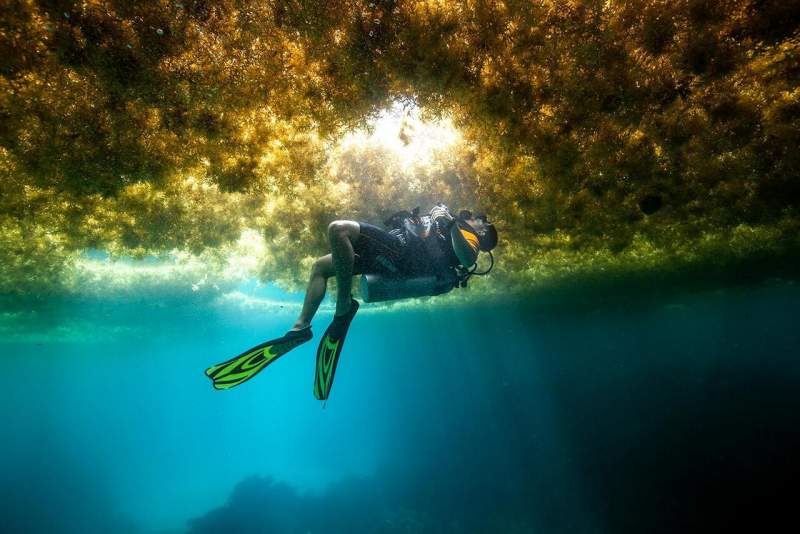 Invasive Asian algae found by ecologists on Maro cliffs.
GENA-Ecologists in Action has found an invasive type of exotic algae on the seabed off the cliffs of Maro-Cerro Gordo natural site.
And the ecologists have warned the existence of the so-called ‘Asian algae’ (scientific name Rugulopterix okamurae), will have “dire consequences for marine ecosystems” in the area.
GENA-Ecologists in Action, Rafael Yus, said the algae is officially considered an invasive species in the Mediterranean Sea.
He said this particular species has a “strong invasive behaviour in infralittoral marine ecosystems,” and competes with native algae” for attachment, since they are not mobile, and the availability of light for photosynthesis.
In the competition for these two factors, the Asian algae “prevails and ends up dominating the entire algal mantle,” said Yus.
The ecologists explained that invasive algae has the capacity to attach to colonies of marine invertebrates such as corals and gorgonians, “hindering the nutritional processes of these invertebrates.”
“And with high temperatures, they reproduce rapidly and produce very large populations that are then massively washed up on the beaches,” said the organisation.
In addition, the Asian algae becomes “trapped in fishermen’s nets increasing the costs of cleaning” on the beaches when they are thrown back into the sea, among other issues.
GENA-Ecologists in Action said the detection “confirms the threat that many of us feared when the algae was discovered in 2015 in the Strait of Gibraltar.”
Since then, “it has been detected both in Cadiz and in various parts of the western Costa del Sol.”
In the cliffs of Maro-Cerro Gordo, the algae has been found at depths of between 50 centimetres and five metres, in an area of rich biodiversity,” reports Axarquia Plus.