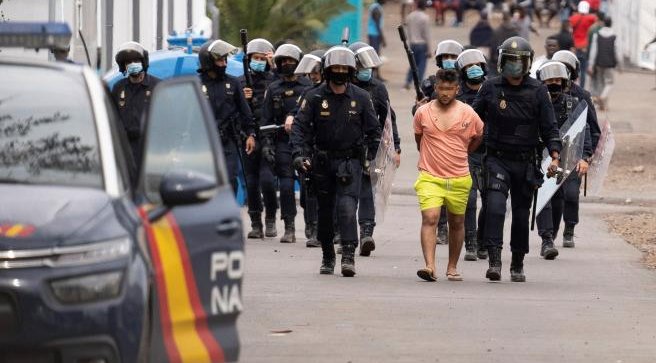 THE president of the Canary Islands, Angel Victor Torres, announced on Thursday, April 8, his intention to immediately deport any migrants who are found to be involved in any violent altercations. His move comes after eight people were arrested after a riot broke out at Las Raices camp in Tenerife on Tuesday, April 6.

Mr Torres condemned the violence in Tenerife and praised the hard work of Accem, the NGO involved in Las Raices, as well as members of the National Police, some of whom were entered when they were forced to storm the migrant camp in riot gear.

“In emergency situations we must put order,” the president said, and made reference to the claim of the Spanish Commission for Refugee Aid (CEAR) that the Canaries are being turned into “prison islands.”

A member of the Tenerife Migrants Support Assembly, told 20 minutos at the time of the riot: “What happened today – we do not know how it happened, we do know that there are people on hunger strike. They are tired, being there a long time without knowing about their future, and they are in very bad condition, which is why they have been protesting for weeks.”

Apparently, it is not the first time that the security forces have entered the camp. On several occasions – due to protests over the conditions and the food – there have been moments of tension that have required the intervention of the National Police.

The president said that there are currently around 7,000 irregular immigrants on the Canary Islands.

He has defended his decision to deport any trouble-makers, insisting that all the measures taken are in line “with the humanitarian aspect” and has pointed out that emergency facilities, such as camps, cannot be places where people stay “weeks, months or years.”