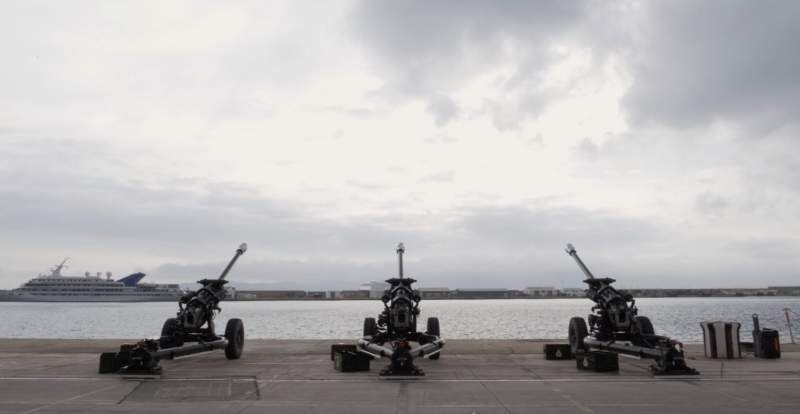 The guns ready for the official salute Credit: GBC Twitter

THE Government and people of Gibraltar, like so many others are mourning the death of HRH Prince Philip, Duke of Edinburgh.

He had a long involvement with Gibraltar and first arrived on the Rock in 1950 when he officially inaugurated the then Legislative Council.

He visited again, with Her Majesty the Queen, in 1954 on their tour of the Commonwealth and then separately on a number of occasions, showing his skill with boats and aircraft.

In 1957, he personally berthed the Royal Yacht Britannia alongside in the Dockyard on the final stop of his Antarctic Adventure and spent 10 days enjoying the sights and sounds of Gibraltar.

In 1991 he personally piloted the aircraft on which he flew into Gibraltar Airport when he visited the Rock to celebrate the 25th anniversary of his Duke of Edinburgh Award Scheme.

As soon as the proclamation of the Duke’s death had been made at Buckingham Palace, the Government lowered the flags of their official buildings as did the Governor at the Convent his official residence.

Flags will remain at half-mast until the day after the Duke’s funeral and at 1pm today (Saturday April 10) Gibraltar will join with the rest of the British family of nations in a 41 round gun salute from the HM Naval Base.

Chief Minister Fabian Picardo has written to Her Majesty the Queen to offer the deepest condolences of Her Government of Gibraltar and the people of Gibraltar at this sad time.

Mr Picardo said “May Prince Philip, the Duke of Edinburgh, Rest in Peace and may God Save the Queen.”