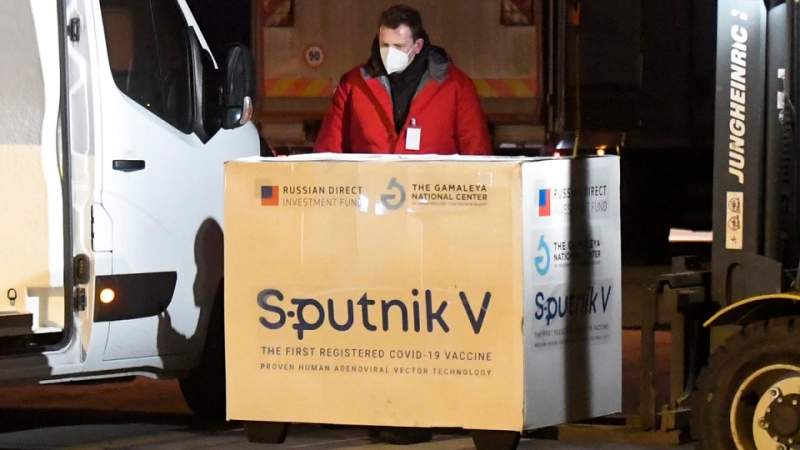 Russian Sputnik 5 Vaccine Waits To Be Cleared For Use By EU Regulators. image: Russian Media

Russian Sputnik 5 Vaccine Waits To Be Cleared For Use By EU Regulators.

Russia has said it is confident that its Spútnik V vaccine will reach the European Union soon although the bloc continues to cite misgivings over the tension and conflict presiding in the Ukraine at the moment. However, with supply problems affecting the rollout across the EU, those reluctances are fading and several countries have already privately contacted Moscow outside of Brussels.

Russia hopes that the upcoming visit of the European Medicines Agency (EMA) will prove positive and that it’s ‘prized’ vaccine will very soon be injected into the arms of Europeans as several other EU member states are actively considering it.

The local government of Madrid has faced widespread criticism for skipping protocol by entering negotiations, without specific consent by the EU, for the purchase of Russia’s Sputnik V vaccine, which has not yet been approved for use by the EMA.

According to sources, the regional administration held three meetings with personnel involved in negotiating the distribution of the Russian vaccine. ABC newspaper reported that at least one of those meetings was in Madrid in February and was attended by the regional government’s healthcare minister, Enrique Ruiz-Escudero, as well as the honorary consul for Russia in the Spanish city of Vigo, Pedro Mouriño.

The Madrid government has since confirmed the reports. “If we have the chance to import the Sputnik vaccine we will do so, and we will do so as fast as possible,” said Mr Ruiz-Escudero, the regional Health Minister.

However, could the manufactures even supply enough doses if the EMA pass it as safe to use?

Vaccinations in Russia itself, which began in December, are slow due to difficulties in manufacturing large quantities of doses. According to recent data, there are just eight million people who have received at least one dose of Sputnik, but only 5.2 million in a population of 146 million, including Russian President Vladimir Putin, who has been vaccinated with the two doses. The figure is very low (3.61%) and far from the targets reached by Israel, the United Kingdom and the United States.

The EU drug regulator announced that it will launch an investigation next week into whether clinical trials of Russia’s Sputnik V Covid-19 vaccine contravened ethical and scientific standards.

The European Medicines Agency’s probe into whether Sputnik V trials met “good clinical practice” standards comes as people familiar with the regulator’s approval process told the Financial Times of their concerns that they had not been ethically run. GCP is an internationally agreed standard aimed at ensuring that drug trials are designed and conducted properly.

Russia has said military servicemen and state employees were involved in trials of the jab developed by a state-run laboratory and funded by the Russian Direct Investment Fund, the Kremlin’s sovereign wealth fund.

The Reuters news agency has reported that some who took part described being pressured to do so by their superiors. Kirill Dmitriev, head of the RDIF, denied the use of coercion, telling the FT: “There was no pressure [on participants] and Sputnik V complied with all clinical practices”.

He said the EMA inspection was scheduled to begin next week. While Russia has pitched Sputnik V as a possible solution to Europe’s vaccine woes, Thierry Breton, the EU commissioner heading the bloc’s vaccine programme, said last month that Europe had “absolutely no need of Sputnik V”. This sparked claims from Moscow that Brussels was biased against the Russian-made jab.

The backer of Russia’s Sputnik V vaccine has demanded that Slovakia return thousands of doses after the country’s drug regulator said the doses received differed from those being reviewed by the European Union’s drug overseer.

The back-and-forth between Bratislava and Moscow on April 8 added further confusion to the ongoing effort to get the Russian vaccine distributed and into people’s arms across Europe.

The Slovak State Institute for Drug Control said on April 7 that there were lingering questions about the efficacy and risks of the Russian vaccine, due mainly to inadequate data from the producer, and that was preventing doses from being rolled out across the country.

On April 8, the institute also said the Sputnik V doses it was examining were not the same as those being reviewed by the EMA, or apparently those that were reviewed in the British medical journal The Lancet.

“Batches of the vaccine used in preclinical tests and clinical studies published in The Lancet journal do not have the same characteristics and properties as batches of vaccine imported to Slovakia,” it said a statement.

Slovakia, along with Hungary, turned to the Russian vaccine even though it has not been cleared by the European Medicines Agency (EMA).