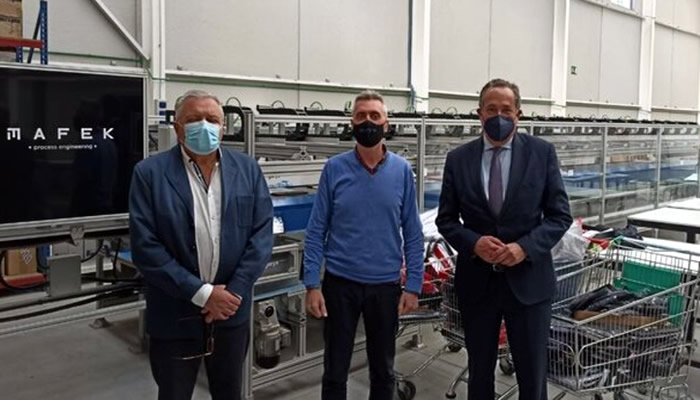 Emilio Ortiz López, the Junta de Andalucía’s minister for Employment, Training, Self-Employment, Economic Transformation, Industry, Knowledge and Universities, accompanied by Vicente García Egea, the minister for Tourism, have visited Gary’s Uniforms, the workwear manufacturing company based in Vélez-Rubio, in the province of Almeria, where they were shown around by the manager, Luis Martínez López.

Their visit was made to learn more about the present and future projects of this national benchmark company that designs and manufactures work uniforms, who are going to receive support from the new Andalusian Innovation and Development Agency IDEA, with two incentives totalling €206,082, to help improve its competitiveness, and its digital transformation.

The IDEA Agency, working within the program for Industrial Development, Improvement of Competitiveness, Digital Transformation, and Job Creation 2017-2020 (co-financed with ERDF), has approved a grant of €183,024 for Gary’s Uniforms, to implement an automatic picking system, which is already in operation, involving an investment of more than €500,000.

Alongside that grant, the IDEA has also approved aid of €23,058 euros for the company to acquire a process management and electronic commerce platform, a digitisation project in which it plans to invest more than €46,000.

Luis Martínez López, explained all about the two projects to the two ministers during their visit, and told them the plans he has for the growth of the business, which currently employs 70 people, designing, manufacturing, and marketing 20,000 products, establishing it as one of the national leaders in the field of manufacturing and sale of work uniforms for the hotel industry, health, cleaning, aesthetics, education, and other sectors.

Luis Martínez has plans to open new lines of business, including workwear for the industrial sector, PPE (Personal Protective Equipment), and work shoes, in addition to expanding the facilities to be able to move into the international market as well.

Gary’s Uniforms is located in a 5,000 m² facility in the Vélez-Rubio Polígono – which opened in 2001 with four workers and 5 seamstresses – and the IDEA grant has already allowed the company to quadruple the number of orders it can process, from 350 up to 1,200 per day, leading to a notable improvement in service to its customers, and cost savings, as reported by diariodealmeria.es.