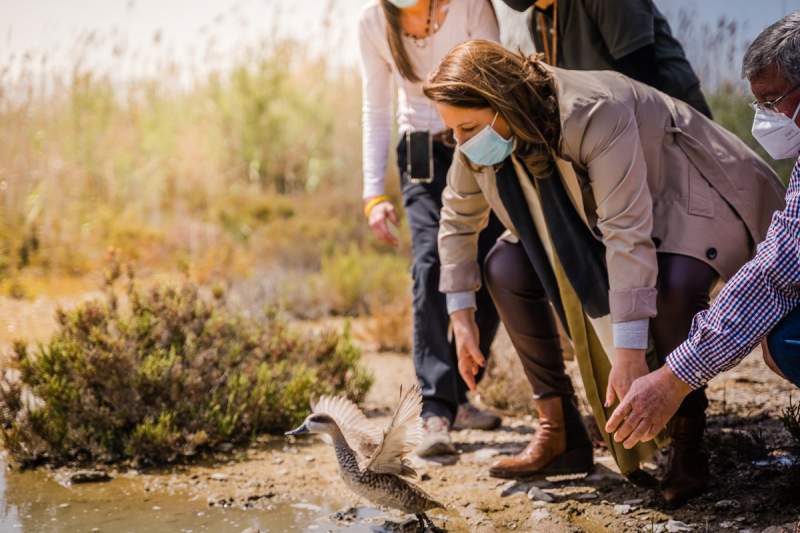 MARBLED DUCKS: 80 of the endangered species will be released throughout Andalucia Photo credit: Roquetas town hall

Duck project THE regional government’s Agriculture department released 30 marbled ducks in the Punta Entinas-Sabinar nature reserve in Roquetas de Mar.  They are an endangered species and Junta plans to release 80 of these ducks, which have been bred in captivity and are all ringed, in different locations throughout Andalucia.
Wild campers MORE than 20 motorhome owners camping overnight in the Cabo de Gata-Nijar park over Easter face fines rising to €600. Parking there is in any case prohibited between sunset and sunrise but the Junta’s Environment officers were also on the lookout for visitors ignoring the region’s perimeter closure.
New role CANTORIA’S former railway station, built in 1894, formerly used as municipal offices, has now been converted to house the Policia Local, the Justice of the Peace and Women’s Centre.  The €70,000, part-financed by the Diputacion, provides efficient attention for the public while avoiding over-crowding and ensuring social distancing.
Not here PULPI’S PSOE party is backing San Juan de los Terreros residents who are fighting plans to build a petrol station and car-wash in the centre of the town.  The socialists’ spokesman explained that neither they nor the townspeople opposed the installation but questioned the “capricious” choice of location.
Opening soon VELEZ-RUBIO’s mayor confirmed that the weekly open-air market would reopen at the end of April.  The market has been closed since the beginning of the pandemic last year and is the province’s only mercadillo that has failed to reopen, to the irritation of both residents and market traders.
Sentence cut ANDALUCIA’S Upper Court of Justice (TSJA) reduced to 18 months the 27-month sentence imposed by Almeria’s Provincial High Court on an adult male who cornered a 13-year-old girl and tried unsuccessfully to kiss her.  Nevertheless, the TSJA upheld the Almeria court’s five-year restraining order and a €1,000 fine.