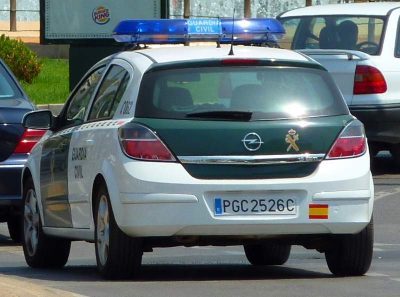 POLICE in Salobreña have arrested a man accused of vandalising a bank.

Officers from the police arrested the man after he was accused of vandalising a Salobreña bank.
The 28-year-old man, who has a criminal record, has been accused of the causing damage to the glass door of a bank in Salobreña, using a large stone.
According to reports, despite trying to hide his identity, the Guardia Civil used CCTV footage to identify him.
A month later several residents in an urbanisation within the municipality reported that somebody had damaged the glass entrance door and an inter-phone panel on two buildings.
The Guardia Civil investigated and found the same man was allegedly responsible for both incidents, before arresting him.
The news comes after locals near the Vial Verde that is being built in Salobreña, had cause for alarm when the reed bed caught fire in the afternoon, and the flames quickly spread towards some properties.
The cause of the fire is unknown, although there are reports of several fires breaking out in different parts of the dry reed bed shortly before 7pm, quickly spreading across an open field near to the beach, and perilously close to some farmhouses located at the end of the field.
Emergencies 112 Andalusia told granadadigital.es that upon receiving several calls from the public about the fire at the Salobreña sugar plantation, they deployed Motril Fire Brigade, and the Salobreña Local Police to the scene, which after 30 minutes was not being brought under control, so 112 had to mobilise reinforcements.
The fire spread quickly through the dry reeds, and also set light to some palm trees, with a strong wind feeding the flames, but the extra firefighters soon extinguished the blaze.
Eyewitnesses told granadadigital.es that the sky had filled with black smoke, “similar to a storm cloud”, which was why they had started to panic as they saw the flames spreading towards them, and were thankful for the hard work of the firefighters in putting out the fire.