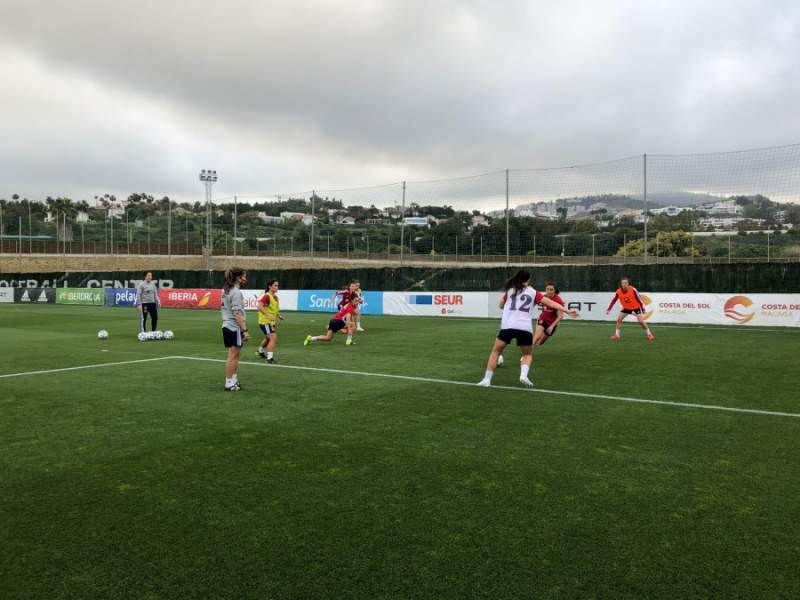 The Spanish national team has come to carry out training at the Marbella Football Centre.
According to Marbella council, the Spanish women’s under-23 football team began its training in Marbella with 24 players, under the command of Montse Tome.
The team will train for  three days at the Marbella Football Centre in preparation for their next matches.
Councillor Manuel Cardeña said: “The town is consolidating itself as a nerve centre of sport and, thanks to the agreement with the Royal Spanish Football Federation, it has become a regular destination for different teams of the national team.”
He added: “They are initiatives that promote sports tourism as a generator of wealth and employment.”
The news comes after the final of the Andalucia Open tennis tournament at the Puente Romano in Marbella is contested between two Spanish players, Pablo Carreño and Jaume Munar, after the semi-finals also boasted four Spanish players.
No1 seed, Pablo Carreño had defeated Albert Ramos in their semi-final match, while Jaume Munar beat Carlos Alcaraz in the other semi-final, on the beautiful clay court of the Puente Romano tennis club, located on Marbella’s ‘Golden Mile.’
The rain had delayed the start of play for several hours, but eventually play began, to a full house, or at least full to the allowed capacity, with fans eager for an afternoon of thrilling tennis, and they were not left disappointed.
Carreño, from Asturias, won the first set with ease, 6-1, but the world ranked No 42 Catalan, Ramos, raised his game and was not giving in, and fought back to take the second set 6-3, going into the third set evenly poised, with the set going to a tie-break after it reached 5-5, with the Asturian eventually taking the third set, and the match, 6-1 3-6 7-6 (7-5).
The second semi-final featuring the 17-year-old tennis prodigy, Murcia-born, Carlos Alcaraz, and the 23-year-old Jaume Munar from the Spanish island of Mallorca, ended in a victory for Munar, 7-6 (7-4) 6-4.