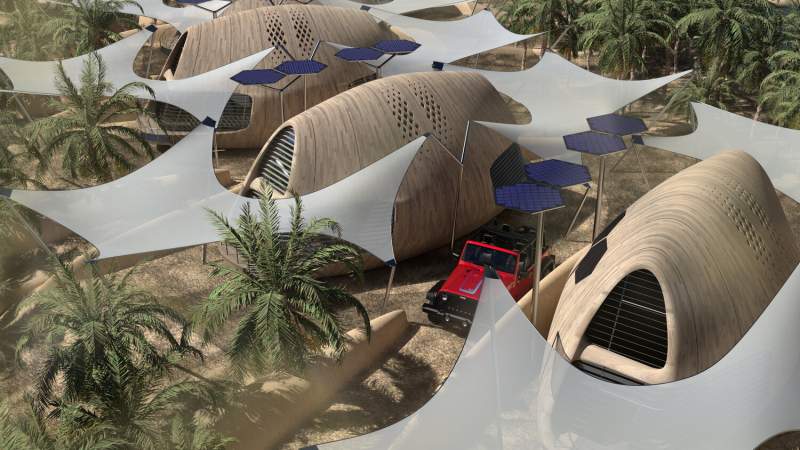 With a renewed focus on climate change post-pandemic, architects at the W-LAB based in Barcelona have developed a series of unique homes that hardly leave an ecological footprint. The researchers believe that, due to an increase in urban sprawl, more and more houses of the future will be built in desert areas. With this in mind, they have developed revolutionary portable homes purpose-made to be comfortable in more arid landscapes. In addition, they make use of natural resources such as solar power and are constructed of environmentally-friendly biomaterials.

“We wanted to know what it would be like to live in a post-climate change scenario in which extreme climates will reign,” the architects said on Instagram, looking ahead to a time in the future where they foresee a large part of the EU “covered by deserts.”

In a worst case scenario, the researchers believe that each eco-friendly home can be joined to form an autonomous community, complete with its own oasis and means of producing sustainable crops.

“Self-sufficiency architectures totally decoupled from general supply networks will be highly valued due to the scarcity of resources,” W-LAB said, who believe that “in the future, in order for us to prosper, buildings should become active energy producers and resources, instead of passive consumers.”

On April 8, Spain’s Congress of Deputies approved a new Law on Climate Change and Energy Transition as a means of reiterating its commitment to combating global warming. One of the major assurances Spain has given internationally with this new regulation is to achieve climatic neutrality by 2050, thus almost eliminating its use of fossil fuels. In order to meet this ambitious target, the Spanish government has set various goals along the way, such as ensuring that by 2030, 74 per cent of the electricity used in this country will come from renewable sources. In addition, by 2030 Spain has committed to reducing greenhouse gas emissions by 23 per cent compared with 1990.

For their eco-friendly settlements, the architects have proposed the creation of mini-villages surrounded by high walls to protect each community from the elements, as reported by Spanish daily Informacion.

“These elements will allow us to create protected spaces, integrated around an artificial oasis, supplied with water from a solar desalination plant and a mist collection system, which will help to improve exterior comfort, and reduce the temperature in the vicinity of the settlement.”