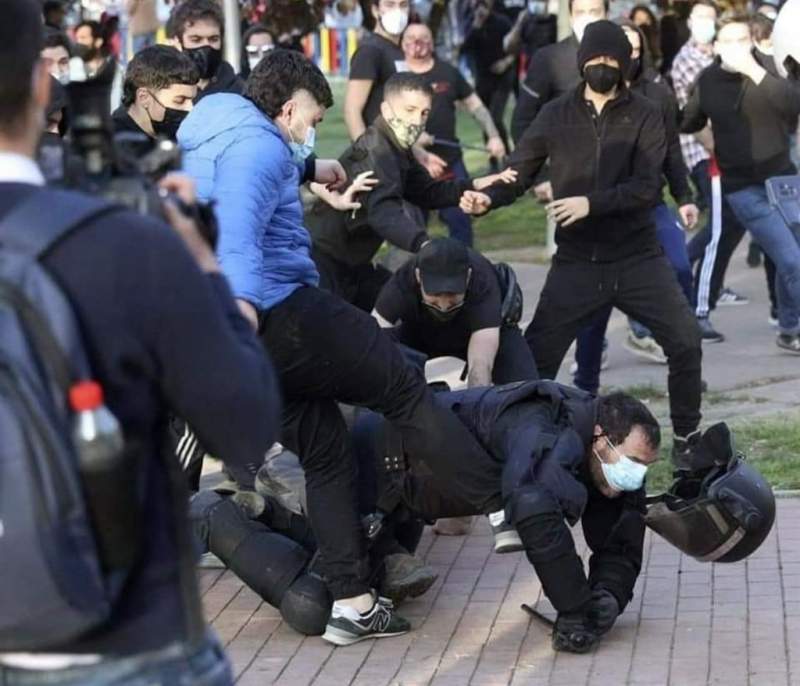 Young man arrested for kicking a police officer on the ground during a political rally in Spain’s Madrid.

OFFICERS of the Police Information Brigade have arrested a 21-year-old man who is accused of having viciously attacked members of the police force during a Vox political rally in the Vallecas neighbourhood of Madrid last week. According to sources quoted in Spanish news outlet La Razon, the young man, known only as Alejandro, was apprehended after several photos and videos of him kicking an officer on the ground surfaced on social media. He reportedly belongs to the Los Bukaneros group and doesn’t have a criminal record.

According to police reports, some 500 people from extremist groups including Los Bukaneros, ultras of Rayo Vallecano, District 104 and Vallekas Antifa converged on the streets of Madrid and were responsible for the riots which saw several police officers get injured. In the days leading up to the rally organised by Vox, the groups took to social media calling on supporters to turn out.

The atmosphere was charged early in the evening of April 7 even as workers set up the stage for the president of Vox, Santiago Abascal, and the candidate for the Presidency of the Community of Madrid, Rocío Monasterio, to give their address. Within minutes, members of the extreme left groups began to arrive carrying banners reading ‘Fascists out of our neighbourhoods!’ and ‘Madrid will be the tomb of fascism.’ The scene quickly descended into violence and the riot police were sent in. Three minors and an adult were immediately arrested for disobedience and resisting arrest and at least 14 people were injured with three requiring hospital treatment.

District 104 calls itself a “collective assembly, anti-capitalist, anti-fascist and anti-patriarchal revolutionary that acts in Aluche.”

The Madrid Information Brigade of the National Police (BIP) keeps a constant watchful eye on these minority groups and others like them due to the danger they pose to public safety, being the ones who usually start these kinds of riots. Claiming that “the streets are ours” these organisations have collectively vowed to cause as much disruption on the streets of Madrid as possible in the lead-up to the M4 elections.