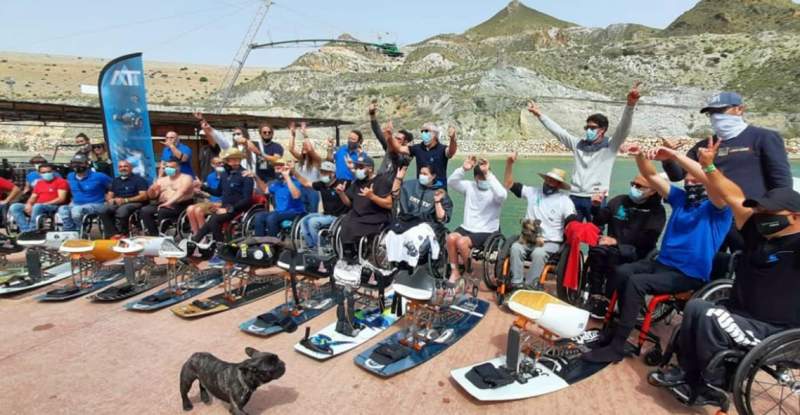 Cuevas De Almanzora hosts the largest sitwake meeting in the world in Spain’s Almeria.
Many people may not have heard of sitwaking, which is a stunning sport that involves ‘adapted wakeboarding’. Cuevas de Almanzora have hosted the largest sitwake meeting which was organised by the French non-profit association, Sitwake Crew. The event could not have taken place though without the fantastic collaboration of Lunar Cable Park and ATI Sports.
Olivier Forgerit, one founding member of the Sitwake Crew association, spoke of the stunning event which they described as the “biggest sitwake meeting in the world”. Over the space of several days 24 individuals were able to make the most of the facilities at Lunar cable park during an event aimed at people with disabilities. Olivier, wanted the event to be a “wonderful and enriching sporting and human experience” for all those involved.
The event which took place from April 5 to April 9, aimed to raise awareness while promoting the sport. They also set out to raise money for future event days and much needed specialised equipment. Participants were able to enjoy several days at the stunning lake in Cuevas del Almanzora. Olivier highlighted that, “Even with a disability, we could achieve and reach our dreams”.
Olivier and Jari Nieminen spoke of being able to share the sport which not many people know about and commented that they hope “other people with disabilities will have the same opportunity to discover the freedom, the joy, the satisfaction and the sense of belonging that this sport offers them”.
The City Council highlighted how people “with mobility problems were able to enjoy one of the best facilities in Europe and the only one in the province of Almeria, also knowing a privileged environment such as the Cuevas reservoir area.”
The Councillor for Sports, Miriam Quintana thanked event organisers for a special and sporty event hosted in Cuevas del Almanzora as reported La Voz de Almeria.