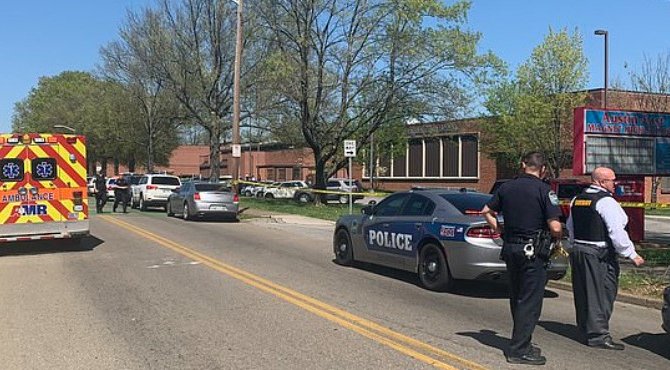 After a shooting incident at 3pm local time, at the Austin-East Magnet High School in Knoxville, Tennessee, USA, officials confirmed that a lone gunman, a student at the school, has been shot dead by police at the scene, and a police officer injured after being shot in the leg.

The Bureau of Alcohol, Tobacco, Firearms and Explosives, and other emergency services, all converged on the site, after a tweet just before 3pm, from the Knoxville Police Department, informing of the shooting situation that was unfolding.

David B. Rausch, the director of the Tennessee Bureau of Investigation said at a news conference that they found the armed student in a bathroom on the campus, and had ordered him to come out, but he wouldn’t comply, and that’s when he reportedly opened fire on the officers, who fired back and killed him.

Said Rausch, “It’s a sad day for Knoxville, and it’s tough for Austin-East”, while Knoxville Police Chief Eve Thomas, when asked by reporters about the overwhelming police response to a call that came in just before afternoon dismissal, said, “We have a student, a school incident. It’s our worst fear, an active shooter in a school”.

The injured police officer, currently being treated for his injuries at a local area hospital, is believed to be the Austin-East school resource officer, and speaking outside the hospital, Knoxville Mayor Indya Kincannon told news station WATE-TV that she had spoken with the wounded officer and he was conscious, and in good spirits.

This incident comes as the community reels from off-campus gun violence that has already left three other students dead this year.

Bill Lee – the Republican Tennessee Governor, who only last week signed off on legislation that will see his state, from July 1, allow most adults over the age of 21 to carry handguns, without the need for any background check or training – during an unrelated press conference, asked the public to pray for the victims, and said he was closely monitoring the situation, as reported by dailymail.co.uk.