Man, 50, arrested at Malaga bus station with drugs taped to body and legs 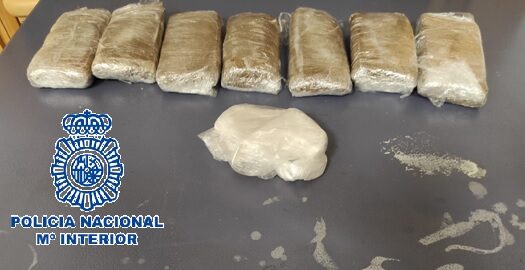 Man, 50, arrested at Malaga bus station with drugs taped to body and legs.
NATIONAL Police arrested a Spanish man at the Malaga bus station after seven hashish tablets parcels were found taped to his torso and legs hidden under his clothing, weighing 651 grammes.
A further 53 grams of cocaine were discovered stashed in the detainee’s jacket pocket.
The suspect was behaving ‘nervous’ and appeared to “glancing around in all directions” while waiting on the station platform, raising the suspicions of nearby police officers.
They approached and asked him where he was from and what he was doing in the area. They were then convinced he was hiding something and began to carry out a search.
In his pocket, police found a white powdery substance, later identified as cocaine. And as the search continued, they discovered that suspect had several “suspicious packages” concealed under his clothes.
In total seven hashish packages had been taped to his stomach, waist and legs. He was arrested and will appear before the courts.
Elsewhere in the province, the National Police have intercepted 807 forged Venezuelan driving licences and detained 802 people in several provinces – with 100 of the arrests made in Malaga.
The police operation was carried out in three stages which also resulted in the intervention of another 296 Spanish permits that had already been exchanged. The National Police reported that 802 people in 19 Spanish provinces have been detained.
Of the 802 holders, they have not been able to prove that they have a legal driver’s licence, which also poses dangers for road safety.
Those detained obtained the false documentation via social networks, with criminal groups in Venezuela charging them an average of $90 (€75.43), promising the Venezuelan driver’s licence to be delivered by post in two or three days.
Since 2017, there has been a new format issued in Venezuela that does not meet the legal requirements to exchange the licence for a Spanish one, resulting in citizens using criminal groups to obtain a forged one in the previous format which they can then exchange for a Spanish licence.