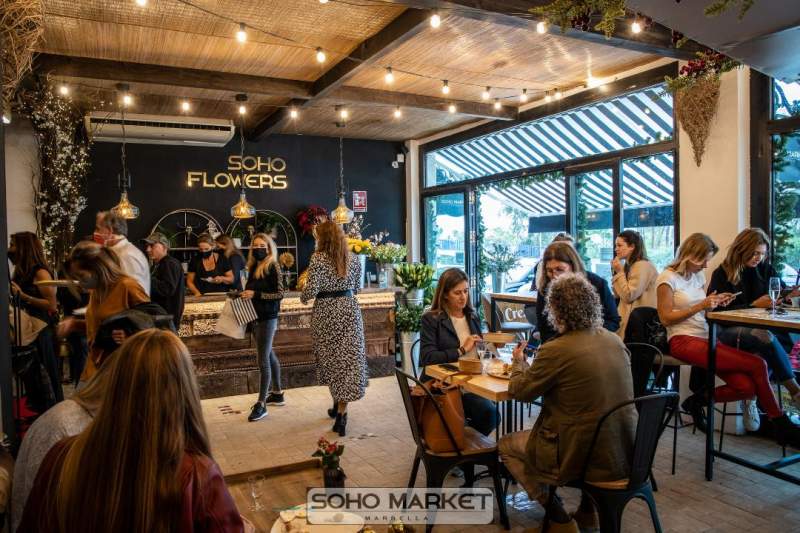 Inside the busy Soho Market Marbella

SOHO MARKET MARBELLA, one woman’s response to lockdown.
For more than 12 years, Lara Gonzalez Navarro ran a very successful events company from her base in San Pedro de Alcantara and then the pandemic struck.
Whereas before, she had been kept busy with over 100 functions for weddings, communions, New Year’s Eve parties and corporate events she suddenly found herself with a book full of cancellations.
To make matters worse, the family that owned the building which she rented decided to sell it and she had to move all of her equipment out at fairly short notice.
As a single parent with two children, she needed an income and had a brainwave as she was walking around the parade of shops in Guadalmina where she saw that a large prominent property was available for rent.
She had already seen that a number of smaller shops in Marbella Old Town had closed because of the lack of business and realised that there were a number of people in similar situations to her who had stock available but no outlet.
Lara created a business plan and decided that if she was able to obtain the property and then rent out spaces to retailers there was an opportunity to create a successful business.
It was a risk but one which she decided was worth taking and thus Soho Market Marbella was born with its opening taking place in December of last year, just in time for the Christmas rush.
The concept behind the market is to offer visitors a selection of different and often unique products with each unit stocking products which do not compete with each other.
Interestingly, of the 14 businesses now situated in the market, all are owned and operated by women who offer a range of products and services which include, coffee and snacks, flowers, clothes, cards, organic cotton t-shirts, jewellery, a beauty salon and a small, intimate restaurant.
There is a very positive, friendly feeling when you enter the store, there are regulars, who come for breakfast almost every day and those working there are equally happy to chat in both English and Spanish.
There is plenty of seating on the terrace as well as inside and there is a huge amount of free car parking and not only will there be a barber’s shop there shortly, there’s even a free games arcade to keep the older children occupied.


Current opening hours for the Soho Market Marbella are 9.30am to 10.30pm, seven days a week which gives an idea of how committed all of those involved with the project are to keep it buzzing and serving the local community.
For Lara it was a brave venture but she has a very entrepreneurial skill which told her that if she attracted a wide range of experienced sellers, then they would have their own clientele who would gravitate to the market and would then in all probability become regular customers.
For the stall holders, they have a one fee to pay which includes all overheads, so they know exactly where they stand and for Lara who now employs seven full time staff, the gamble has worked although she still hopes to resurrect her events business as well.
Enjoy a visit to Soho Market Marbella, Centro Comercial Guadalmina
Tel: 952 73 88 75 / 619 61 33 21
https://sohomarketmarbella.com and Instagram