Spain is home to a culinary world of weird and wonderful dishes – but do they tickle your tastebuds? 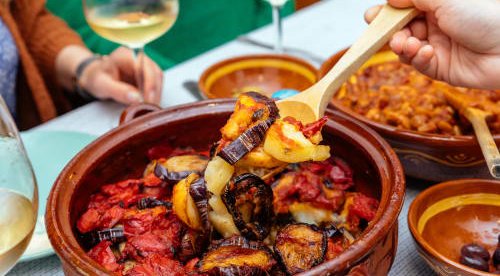 Spain is home to a culinary world of weird and wonderful dishes – but do they tickle your tastebuds?

MOST of us have probably tried some of Spain’s most typical dishes, such as paella and octopus (pulpo), but there are many more unusual foods that natives enjoy on a regular basis.

From goose barnacles to bulls testicles, there are plenty of dishes that perhaps only those with a more adventurous palate would try.

It has to be said that in Spain, every single part of almost every animal is eaten, and that means the tails too.

A delicacy in Spain is Rabo de Toro, a bull’s tail stew that is hugely popular in Andalucia, particularly in Cordoba where it is said to have originated.

Not surprisingly, it can be found in restaurants close to bullrings in other regions too.

The bull’s tail is braised and then cooked with ingredients such as onions, peppers, tomatoes, red wine, garlic, and other herbs and spices. Would you give it a try?

From the bull’s tail to its testicles! Criadillas, as the dish is known, is bull’s testicles typically dipped in egg before being wrapped in breadcrumbs and deep-fried.

Traditionally found in Madrid, Oreja a la Plancha is a much-loved tapas dish that consists of pig’s ears that are cut into slices or cubes and grilled in olive oil with spices and seasonings.

“Pigs ears are nice and crunchy! But you’ve got to have strong teeth to chew them,” said one expat who gave them a go.

In Madrid, they are often served with mushrooms and pieces of bacon, accompanied by lemon wedges (and small toothpicks for eating the ears) on the side.

In the Basque region, the ears are served with salsa Vizcaina, a sauce made from onions, garlic, stock, and red peppers. Most people claim that the best part of oreja a la plancha is the texture – from the crunchy cartilage to the chewy skin.

Is this dish on your list of ‘must tries’?

Ensuring that nothing goes to waste, the Spanish have also created a speciality using the feet.

In the past, the unwanted parts of the pig or cow were given to the poor people whose job it was to kill them, as a type of payment, so they had to become very creative at finding ways of cooking them.

In Andalucia, pig’s trotters are often boiled and flavoured with garlic, bay leaves, saffron and peppercorns in a dish called Manitas de Cerdo, while in Catalonia, you may see stuffed pig’s trotters on the menu.

Perhaps not so surprising to see on a menu in Spain are Percebes – goose barnacles which, like other barnacles, are filter-feeding crustaceans.

They live in deep water and are found in oceans all over the world, although in most countries, people don’t eat them.

In Spain, however, they are considered a delicacy, particularly in the Basque Country and Galicia, where they are boiled for a few minutes in seawater.

They are expensive, so are eaten as a luxury item. Would you be happy to fork out that little bit extra to sample them?

Another more expensive delight is Angulas, baby eels that are about twice as thick as noodles.

Rather than part of a dish, they are normally served on their own, typically sautéed with oil and herbs, garlic, dried chilli peppers and white wine and hugely popular in the Basque Country.

“These are far tastier than they look,” said a British waiter from Alicante. “They are a bit pricier but really worth a try.”

Other weird and wonderful offerings include Sesos de Cordero, lambs brains that are a speciality in La Rioja, and stewed cockerel crests known as Crestas de Gallo typically found in Zamora.

And look out for sea snails – Caracoles de Mar, a tripe stew found in Madrid called Callos, and a Galician dish called Lamprea en su Propia Sangre, which is Sea Lamprey cooked in its own blood.

Thank you for taking the time to read this news article “Spain is home to a culinary world of weird and wonderful dishes – but do they tickle your tastebuds?”. For more UK daily news, Spanish daily news and Global news stories, visit the Euro Weekly News home page.