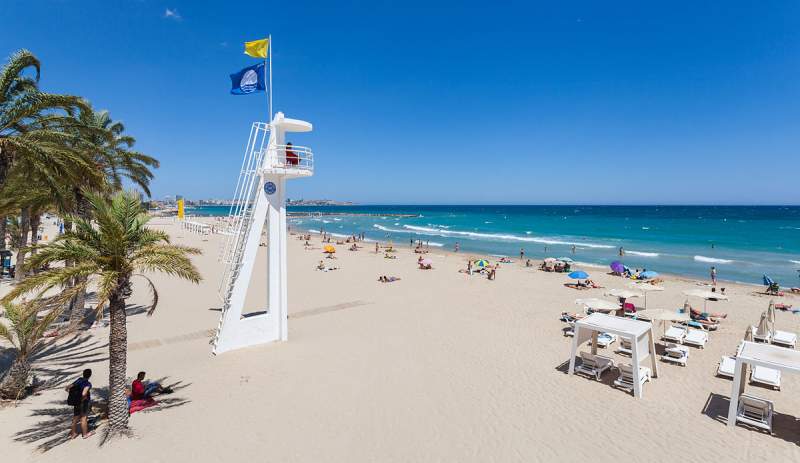 Stretches of beach in Costa Blanca’s Alicante to be designated for the elderly and visually impaired.
ALICANTE City Council has today (Tuesday, April 13) approved a €180,000 scheme for the Beaconing of Beaches and Bathing Areas for the Elderly and Visually Impaired.
A 3,000 metre stretch between Cabo de las Huertas to the Coves de los Judíos will see designated coastal strips and new beaconing 150 metres into the sea, with buoys installed every 50 metres.
The move is in response to a request to install a channel in Cabo de las Huertas frequented by a large number of diving enthusiasts and swimmers, who have asked the council to “protect this practice through coastal marking to protect them from boats”.
“Similar measures will be installed at Postiguet beach to improve accessibility for the elderly, and another to facilitate access to bathing for the visually impaired, in addition to the special areas of the beaches of San Juan and Saladar-Urbanova,” said Alicante City Council.
“These areas already offer, during the summer period, assistance and activities for people with disabilities, as well as a service of accompaniment and assistance to the bathroom for people with functional diversity and reduced mobility.” it added.
In addition, nautical access channels will be created for boats that use the navigable areas with the beach, and 540 buoys will be used to mark the beaches of San Juan, Postiguet, Almadraba beach, Albufereta, Tiro Pichón area, Saladares beach and Tabarca.
The installation of anchoring buoys for boats in the marine reserve and swimming channels is also planned for San Juan and Albufereta beaches.
Plans to establish Alicante as a top cruise destination were announced last week.
Faced with the uncertainty of international travel, the Alicante Association for Cruise Tourism has put together a plan to create national routes and ‘check-ins’ at small ports so that Alicante can benefit from the arrival of cruise ship tourists.