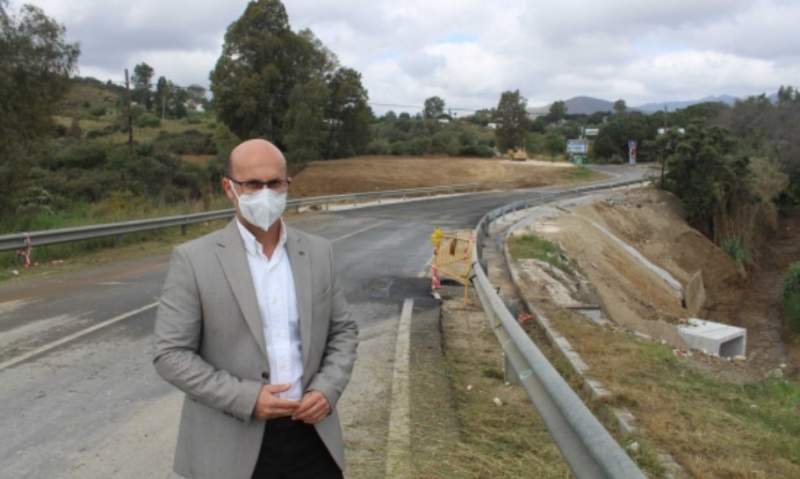 Storm-damaged Road From La Cala Resort Down To The Coast Finally Reopens.

THE road that connects La Cala de Mijas and La Cala Resort, on the Costa del Sol, which was damaged during storm Filomena, has once again been opened to traffic, after works were completed on the section that was affected by the Filomena storm, near to the El Jinete restaurant.
Damage caused by the storm made it dangerous to the public, so the road closed while emergency works were carried out, but during the work, it was then decided to install a new 40 metre long, by two metres wide, concrete frame to replace the drainage area that existed in this section.
José Carlos Martín, the Mijas councillor for Operational Services explained that the new concrete infrastructure allows water to now pass through and prevents the chance of similar storm damage occurring in the future, saying on location at the opening of the road section,  “Here there was a 1.80 metre pipe that was broken, and that caused the rainwater from the storm to be unable to escape.”
He continued, “A kind of dam was created that damaged the platform of the vial. That is why we have built this new framework, which apart from having much more dimension, is safer, and we have expanded the cleaning of nearby areas.”
Adding, “We also had to divert a medium-voltage Endesa cable, for that reason the action has been prolonged, since we depended on a third party. Once the framework has been completed, the pavement has been built, all the paving has been relaid, as planned.”
Also, says Mr Martín, the section of storm-damaged road repaired is 12 metres long, and had to be resurfaced after all the work was completed, and he declared the road is now open again to the public, as reported by mijascomunicacion.org.