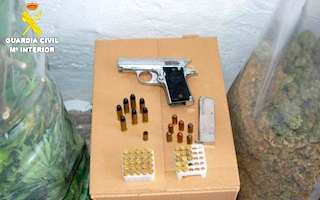 AN ALMUNECAR man has been arrested for gun possession and drug crimes.

Police in Almuñecar arrested the man for gun possession and for a drugs crime.
The 45-year-old man was arrested in Almuñecar on possession of a gun and for growing cannabis and selling marijuana.
His 42-year-old girlfriend was also charged with growing cannabis.
The Guardia Civil began their investigation in Almuñecar after suspecting the man was growing cannabis and put together enough evidence to obtain a search warrant from a judge to search his home and garages.
After searching the premises, the Guardia Civil reportedly found a 9mm, automatic gun and 90 rounds of different calibres. There were also three kilos of marijuana and 425 plants.
The gun has been sent off for analysis.
The news comes after the National Police in Malaga arrested a 66-year-old Spanish man for making death threats against his neighbour, even calling the police claiming that he was going to kill his neighbour with a shotgun.
According to a National Police statement, the detained man had argued with his neighbour one day before, over his blocking the entrance to the elevator with some personal belongings.
Then the man reportedly made a 091 call to the police requesting them to come quickly to his building, stating his intention to shoot the neighbour with a shotgun.
At the scene the officers spoke with both parties, to clarify the origin of the problem, and both men admitted that their encounter started on Wednesday when the victim, accompanied by his wife, had asked the other man to remove personal objects that were blocking the community lift, at which, the man became aggressive and insulted him, even threatening him with a gun.
The man refused to deny the story, and police proceeded to arrest him for threatening, with the alleged perpetrator handing over to the police a gun.