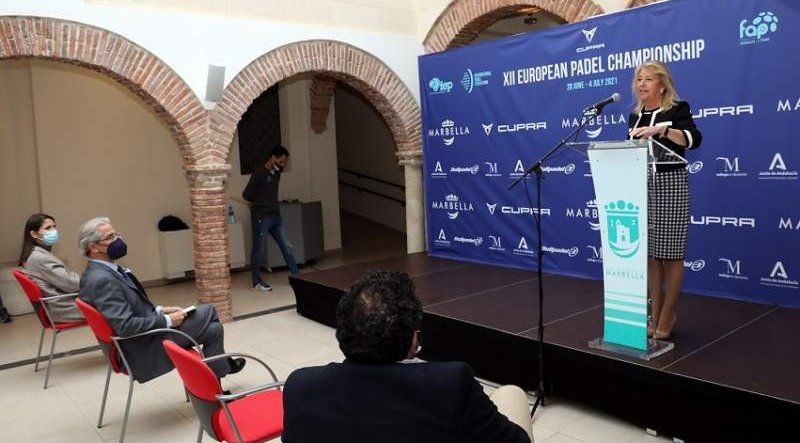 Marbella in Malaga, Spain, is set to become the world capital of paddle tennis in June as it plans to host a series of top-level competitions.

The first competition will be a World Paddle Tour event (from 7 to 13 June) and the next is the XII European Paddle Tennis Championship, which is held twice a year- that will take place from June 28 to July 4.
Marbella mayor, Ángeles Muñoz, said that after 14 years of absence, these events will help promote the area and hopefully have a great economic impact. A total of 400 players from 16 European teams will descend on the municipality with hotels in Marbella already taking bookings for the events.
“From the City Council we have always bet on the pairing of tourism and sport”, said the mayor, who thanked the Andalucían, national and international padel federations for their commitment to the city, as well as the commitment of the Andalucían Government and the Diputación de Málaga.
The councillor added that, quote: “Marbella is the cradle of paddle tennis”, and emphasized that it is a sporting discipline “that is on the rise”, so “it is a pride to be able to count on the best paddlers and return to be a benchmark in the organization of quality and safe sporting events ”.
The presentation ceremony of the XII European Paddle Championship, which took place at the Hospital Real de la Misericordia, was attended by a host of vips, they included:
The president of the Spanish Paddle Federation himself, Ramón Morcillo; his counterpart from the Andalucían Federation, José Pérez; the territorial delegate for Education and Sports of the Junta de Andalucía in Malaga, Mercedes García; the first vice president and deputy for Education, Youth and Sports of the Malaga Provincial Council, Juan Carlos Maldonado, and the national coach, Juanjo Gutiérrez.
Morcillo said, quote: “We are very satisfied that they have designated Marbella because it is the city where this sport was born and we can say that paddle tennis is coming home. In these times it is essential to support sport, which has to be part of the solution to the time that we are having to live,” ha also predicted that the competition will be “a great success.”
Juan Carlos Maldonado stressed that the important thing is that, quote: “During a week more than 400 players from Sweden, France, Italy, Belgium or Denmark and other parts of Spain have the opportunity to enjoy our tourist and hotel offers, which translates into a source of wealth and employment ”.
Source: Marbella Town Hall