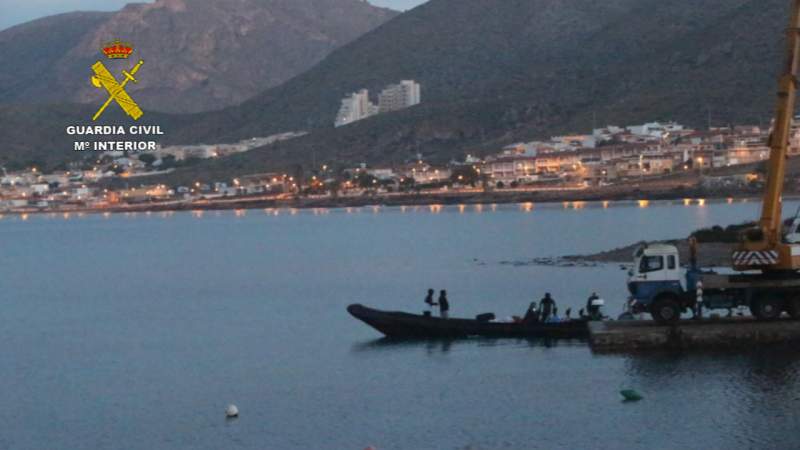 Dozens of arrests on Spain’s Costa Blanca and Costa del Sol as police shut down ‘an important’ drug network that ‘supplied hashish to other criminal groups.’
ALONG with 64 arrests, police seized more than 2.3 tonnes of hashish, 22 high-speed boats, 19 lorries, weapons and €118,000 in cash.
“The Guardia Civil, within the framework of the operation ‘Desvanes-Dunas 20’, has dismantled an important criminal organisation dedicated to introducing hashish into Spain from Morocco. In the same way, it offered its services to other gangs to introduce drugs through boats,” said the police in a statement.
The dozens of arrests were made in Malaga, Alicante and Murcia, along with further searches and suspects detained in Almeria, Cadiz and Albacete.
“The services they provided to other drug trafficking networks ranged from the manufacture and storage of the EAVs (High Speed ​​Boats) commonly known as ‘narcolanchas’, to the supply of fuel necessary for the cache of hashish on the coasts as well as the falsification of the documentation necessary to give the legal appearance of the ships, management of ports for launching, etc,” added the Guardia Civil.
“The leaders of the organisation had their bases of operations in the towns of Malaga, La Linea de la Concepcion (Cádiz) and Calpe in Alicante.”
The suspects reportedly contacted, through buying and selling web pages, sellers of semi-rigid boats, posing as buyers to obtain copies of the documentation.
Later they altered the documents to match their ‘narcolanchas’.
Once they had the modified documentation, they labelled the boats with the usurped licence plates and falsified the powers of the engines making them legal, since the EAVs exceeded 1,000 hp, being illegal for private use.
During the investigation, officers discovered the group had allegedly carried out at least 23 launches, some of them in the Alicante towns of Calpe, Altea, Guardamar del Segura, and in the ports of Carboneras, Almeria, and La Azohia in Murcia.
Five people were recently arrested on the Costa del Sol after drugs were found in rented cars in Malaga bound for Germany.