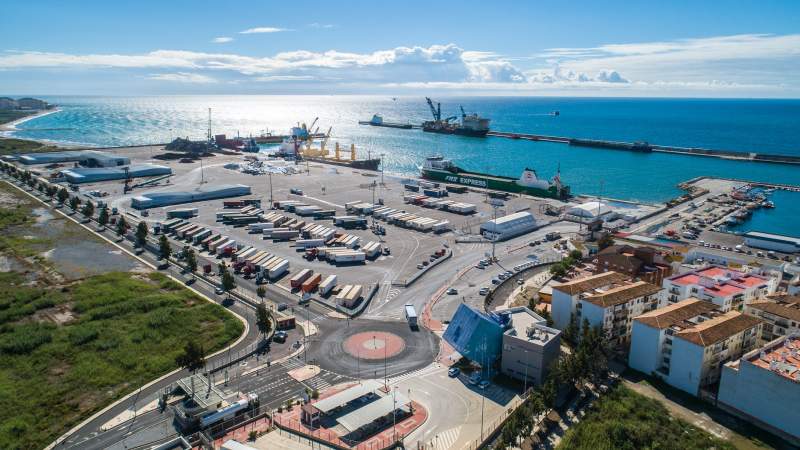 Motril Port breaks its all-time freight traffic record moving more than 731,000 tonnes in the first quarter of 2021.
THE port has recorded a growth of 18 per cent compared to 2020, and an increase of 2.26 per cent compared to 2019, which was the fourth best year for freight traffic
“We are, therefore, facing the best quarter since the Port Authority was created,” said the Puerto de Motril in a statement.
The data was released at a press conference led by the port’s president, José García Fuentes, who confirmed an increase in “solid bulks, liquid bulks and project loads,” mainly wind blades and the incorporation of new general merchandise such as turbines and towers for wind turbines.
“This is in a quarter marked by the difficulties derived from the health situation and which keeps the regular maritime lines with North Africa inactive,” he said.
Of the total increase, 31.01 per cent corresponds to exports of wind turbines destined for Europe, America and Asia, solid bulks from the gypsum, celestine and dolomite mines in Granada, and biomass and metallic material destined for recycling in blast furnaces.
Imports represent 54.74 per cent of traffic, mainly merchandise for supplying industries and the primary sector in the area, such as paper pulp, kaolin, molasses and alcohols, fuel and fertilisers for agriculture.
The remaining 14.25 per cent is merchandise in maritime transit.
García Fuentes pointed out that the data for the quarter “encourages optimism” since “we have achieved record merchandise figures despite adverse circumstances and without the activity of the regular ferry lines.”
In this sense, he believes that if this growth rate is maintained “we could reach over three million tonnes by the end of the year, a figure never reached in the Port of Motril.”
“Port activity accounts for 2.5 per cent of the GDP of the entire province of Granada and generates 5,841 jobs, of which about 5,200 (90 per cent) are in the surroundings, that is, Motril, the Costa Tropical and the rest of the province,” said Fuentes.
The economic impact is €1.1 billion, he added.
Earlier this month it was announced the port is set to receive new subsidies for its Spain to north Africa sailings.
The company offering the sailing from Motril to the Spanish enclave of Melilla on its Hypatia de Alejandra ship, Balearia, has reportedly received a subsidy worth around €4 million from the Spanish government.