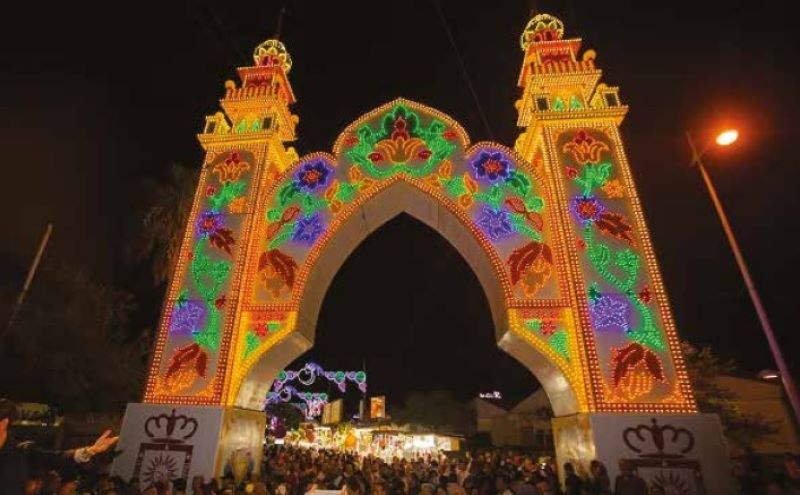 The iconic entrance to the San Pedro Fair Credit: OPS

POLITICAL party Opción Sampedreña (OSP) which holds two seats in the Marbella Council has proposed that in the same way that Lewis Carroll invented the Unbirthday, San Pedro should hold an ‘Un Fair’.
Traditionally, the San Pedro Fair which is held in October is the last of the large fairs of the year on the Costa del Sol, attracting tens of thousands of people and is a great money spinner for local commerce.
The OSP Councillors have written formally to the Mayor of Marbella suggesting that subject to prevailing health advice a longer yet scaled down fair be held from either October 8 to 24 or October 15 to 31 after consideration of the long-term weather forecast.
They argue that the pandemic has placed some economic groups considered ‘non-essential’ in an extreme situation and for some of them, the San Pedro Fair was a very important date especially for fashion and footwear stores, accessories, florists, taxi drivers and many more.
Apart from the financial option, they also argue that it is about time that people had a chance to let their hair down, dress up and have fun for a change especially as by October the 70 per vaccination target should have been exceeded.
They are proposing a scaled down version with a few subsidised stalls and some music and kid’s entertainment with the event taking place not as usual just at the fairground but in the streets around the town to give the chance of extra business to local stores, bars and restaurants.
‘Open Day Fairgrounds’ could be created as used to happen years ago where residents and visitors enjoyed the daytime fair in the centre of the town and by this, a little bit of normality and fun could return to San Pedro, subject at all times to advice from the health authorities.