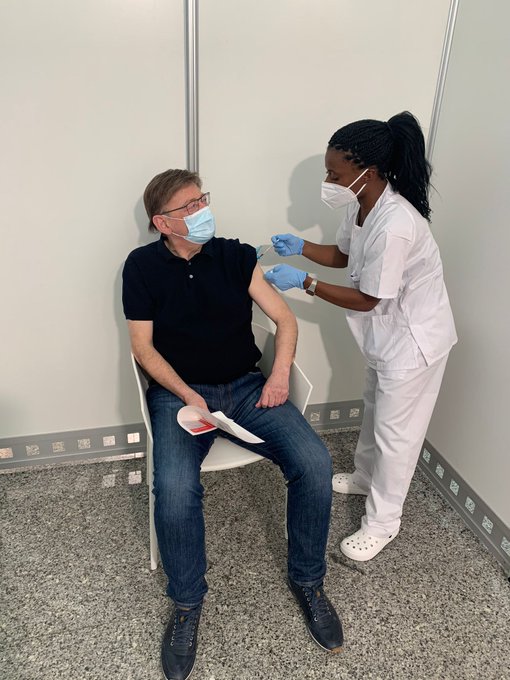 VALENCIAN president gets the AstraZeneca Covid jab
The president of the Valencian Community, Ximo Puig, has proudly posted on Twitter that he has received his first dose of the AstraZeneca Covid-19 vaccination on Monday, April 19 at the City of Arts and Sciences of Valencia. The 62-year-old regional head received his jab at 3:36pm and accompanied his Tweet with the words: “Gràcies. Continuem.”
Tweets by ximopuig
61-year-old Manolo Mata, of the PSPV in Las Cortes Valencianas, also received the same coronavirus jab today and similarly took to social media to celebrate the occasion, claiming that the whole process was “super fast and painless.”

The inoculation of the senior Valencians comes on a day when many issues surrounding the Covid vaccines have emerged. Earlier on Monday, Spain’s vaccine rollout plan really kicked up a gear with the news that some 1.2 million doses of the Pfizer jab had arrived in the country, ready to be distributed to the autonomous communities.
Meanwhile, the Ministry of Health has announced it will shortly begin a clinical study in which a dose of Pfizer will be given to people who have already received the AstraZeneca vaccine.
In recent hours, it has emerged that the Ministry of Health is planning to approach the heads of the autonomous communities in Spain with a proposal to extend the waiting time between the first and second doses of the Pfizer and Moderna vaccines from 21 to 42 days in a bid to speed up the rollout plan.
According to the latest data from the Ministry of Health, 9,002,054 people, 19 per cent of the population, have received at least one dose since the start of the vaccination campaign, and 3,328,701, 7 per cent, have the full schedule. Out of the 13,703,085 doses so far delivered in Spain, 90 per cent have been administered to the population.
Source: Informacion
_______________________________________________________________________
The Euro Weekly News is running a campaign to help reunite Brits in Spain with their family and friends by capping the costs of PCR tests for travel.  Please help us urge the UK government to cap the costs here